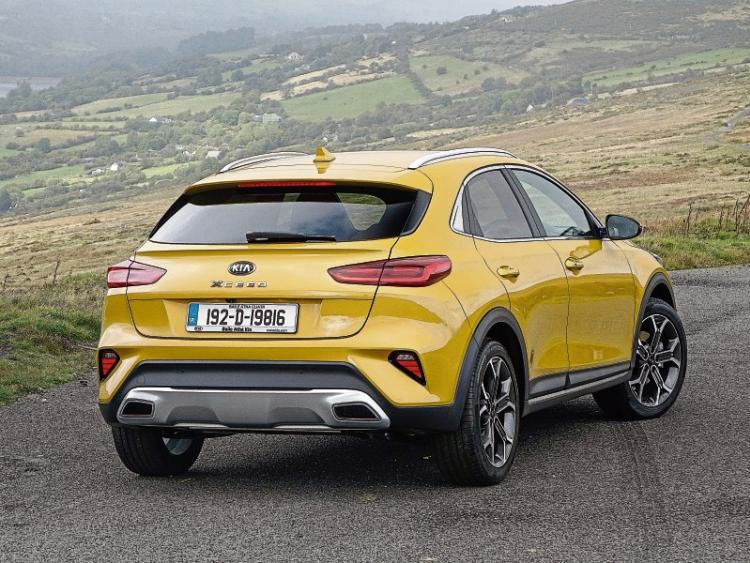 If you ever did find yourself designing a new car, you could do worse than take a leaf out of if Kia’s book.

In the first instance, make sure it’s good looking, in a brooding sort of way, with sleek lines, bumps in all the right places.
Next, make sure it’s stuffed full of the latest technology, and in that respect, always include a surprise, so that a new owner can say to their friends, “look, look at this....”.

In the case of the XCeed that I drove last week in Dunleas in Kilcullen, it was a little shelf in front of the gear stick, just big enough to hold your phone, that low and behold, is also a wireless charger.
These are the kinds of details that matter.

Next, make sure it’s practical, with generous seats front and rear and a boot big enough to actually use in the real world, by real people.

Next, make it good to drive, with firm suspension, confidence inspiring through corners and a bit of torque to, you know, give that satisfying sense of power.

As aside note, I’ve come to the conclusion that for many motorists who haven’t actually done any serious racing, torque is more important to them than all our speed.

Torque implies power, and confidence, where as speed, to the inexperienced, can be scary.

The 1 litre engine in the XCeed I drove had a nice little rumble, the kind you expect in something with an engine three times as big, that got louder and more insistent the more you pressed the accelerator, without, at the same time, appearing to be raspy.

You don’t expect huge speeds from a 1 litre engine, but I did find that at higher revs, like, well over 3,000 rpms, it had quite respectable responsiveness and torque.

I’m always conscious that as a diesel driver, where there’s more power immediately available at lower revs, I have to adjust my mindset when sitting in a petrol engined car to understand that the kind of torque I’m used to isn’t available until the revs go higher.

It’s neither better nor worse, but different. And, over the course of a half an hour driving her around the back roads between Brannockstown and Old Kilcullen, I came to really really enjoy driving her.

A sporty little number was the thought that occurred to me.

I should also add that it’s also available in a 1.6 diesel and a ‘mild’ hybrid is on its way. Mild hybrid means that it assists the regular petrol engine when it’s under load or accelerating hard. It won’t run the car by itself.

Now, as to the general dimensions of the car, Kia are calling it an “urban crossover utility vehicle”.
I honestly don’t know what that means, except some vague notion of being slightly higher than a car and lower than a small crossover SUV.

It’s somehow lost in the myriad multitude of crossovers. In any event, if you didn’t realise it was a crossover, you’d never have guessed.

The only thing I say is that it’s taller than a low down car, but then most cars are.

And it has the sort of shape that many SUV’s have, except with smaller wheels.

However, none of the above should take away from the fact that this is very fine and capable car.
It’s a hatchback in the C (Golf/Corrolla) segment with great comfort and space, and a very capable touchscreen based entertainment system.

Kia say it merges the strengths of both hatchback and SUV and I can kinda see what they mean by that, in terms of its size.
They note that the C segment is getting bigger these days because of the broadening range of models in it — which is another way of saying that everything called a crossover, whether properly so, or otherwise, is thrown into it.

So, who’s it for? What kind of driver is in the market for one of these?

My suspicion is that if you have a busy and adventurous lifestyle, then it’s for you.

Maybe you’re into your sport, and heading off on weekends away all over the country, then it’s your motor.

Being a 1 litre, no matter how much torque it has at high revs, it does have good miles per gallon, as petrols go — 5 litres per 100 kms.

The 1.6 diesel is of course better, with as low as 3.8 litres on the open road, although the economics of diesel are set to change in the coming years as climate change legislation starts to kick in. With that in mind the hybrid is probably worth investigating. As ever, Kia offer their famous seven year warranty. Prices start at €27,295 and go up to €31,045.
Dunleas of Kilcullen is on 045-481299 or dunleasofkilcullen.com