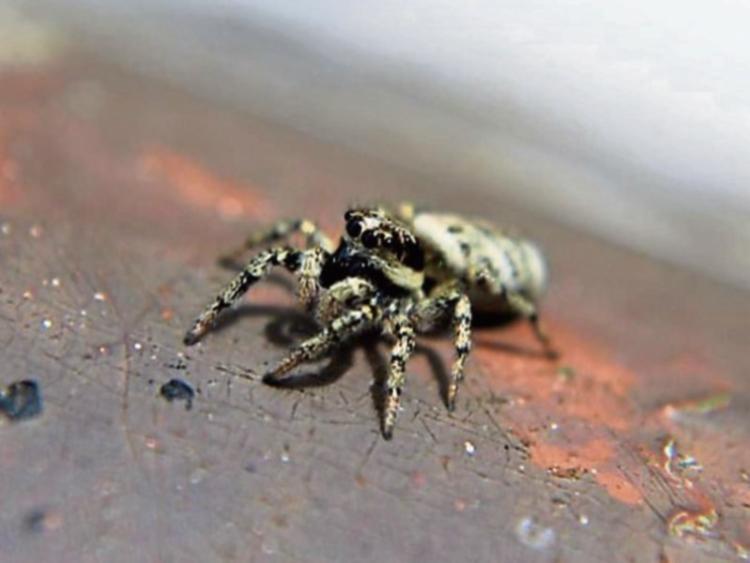 This week my colleague introduced me to a spider I never knew existed in Ireland — the zebra jumping spider (damhán alla léimneach séabra as Gaeilge).

Apparently this native spider is widespread and common and can be found, if you look close enough, climbing on our house and garden walls.

It is a small spider, measuring only 7mm in size, with females being slightly larger than males.

Its body is covered in fur that is patterned black and white ( hence the zebra part of its name), it has short stocky legs and its most distinguishing features are its eight eyes.

This spider is a carnivore similar to other spiders — however it is also different from other spiders as it does not spin a web to trap its prey, instead preferring to hunt.

The largest of the zebra jumping spider’s eight eyes are those two that are found in the centre of its head. These eyes provide perfect binocular vision, while the remaining six eyes that sit at the side of the head are used for peripheral vision.

The zebra jumping spider will sit and wait for a potential meal, often choosing to eat other invertebrates of equal or lesser size — however, they can indeed eat prey up to twice their own size.

Once a target is identified, the spider will slowly creep towards its intended prey and, once in reach, will set down an anchor and jump towards its victim in the hope of a tasty meal.

To attract a female, the male of this spider must perform a courtship dance. The female will then lay and care for her eggs, and once the spiderlings have hatched, the female will continue to care for them until they are ready to make their own way in the world and disperse.

So, this zebra jumping spider was a new species for me this week, and it is why I always say learning the variety of species in our communities is a lifelong learning process. If you would like help identifying a wildlife species, contact me at details below.