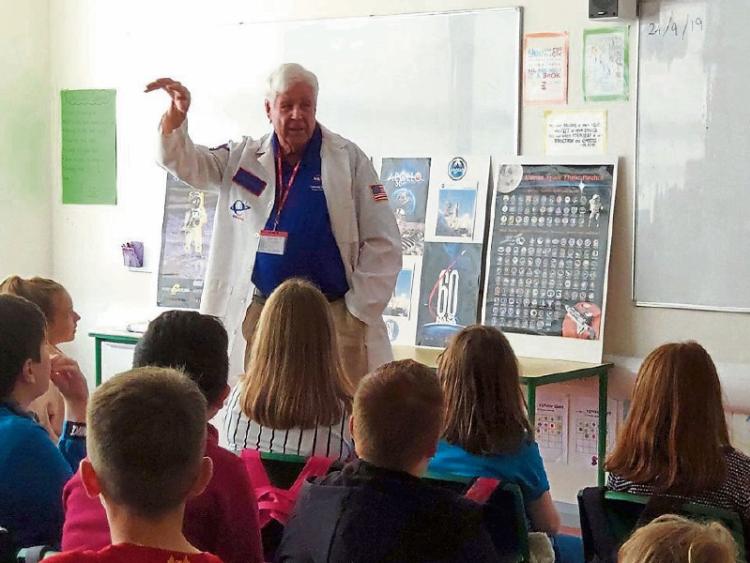 Ron Bledsoe, retired NASA engineer, who worked on the Apollo 11 mission in 1969 visited the Kildare town Educate Together school last week.
Accompanied by his wife Marge and daughter Vicky, Ron gave a wonderful presentation to the very lucky children and staff, and entertained some very enthusiastic questioning from them.
Apollo 11 was the spaceflight that first landed humans on the Moon.
Commander Neil Armstrong and lunar module pilot Buzz Aldrin formed the American crew that landed the Apollo Lunar Module Eagle on July 20, 1969, at 20:17.
Both children and teachers were enthralled by Ron’s stories of getting humans into space and reaching the moon — staff members queued to meet him and have their photos taken with him. He kindly brought along NASA posters and stickers for the children too.
Ron worked on the design and development of the Apollo Programme F-1 rocket engine, which was at that time the largest rocket ever built, and which flew the first manned mission to the moon. He then became the Project Engineer and monitored all the Apollo launches and flights to the moon.
“He’s one of the most inspiring people we’ve had in our school, and is a fine example to all our students, especially our budding engineers and scientists,” said Aideen McDonagh, “It was a privilege to hear him speak, and we will remember his visit for a long time to come.”