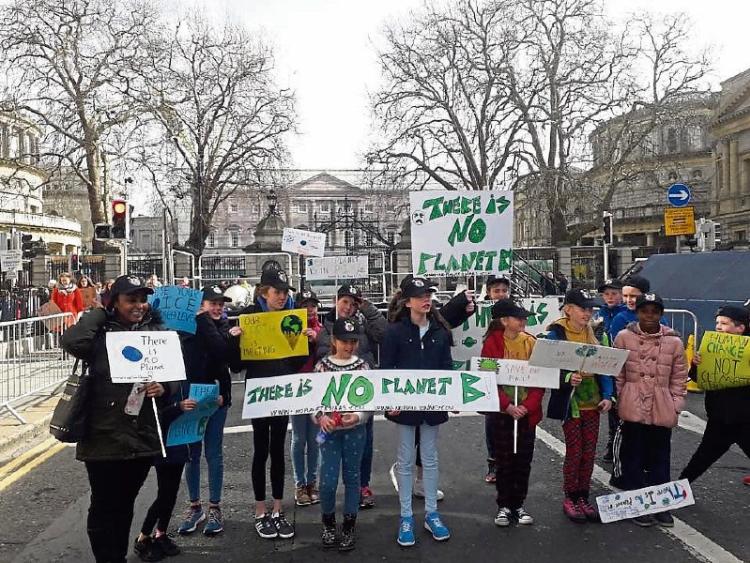 Buses are due to leave Newbridge, Naas and North Kildare this morning with Kildare campaigners set to join a national protest blaming the government for inaction on climate change.

Niamh Cowdell, who is leader with No Planet B youth and a member of Extinction Rebellion says there are currently 22 people scheduled to set out on a bus, which is leaving Naas at 11 o’clock from outside the Mercy Convent.

“The group is made up of members of No Planet B, Extinction Rebellion and concerned members of the public,” said Niamh.

No Planet B is a group of young Naas eco warriors aged 8 to 11 years of age, who attend the Mercy Convent School in Naas. In June, they staged a presentation at Naas Library attended by councillors, Vincent P Martin, Anne Breen, Bill Clear, Carmel Kelly and Fintan Brett.

The message at the heart of their presentation was that there is no alternative to the planet we live on, and there is no planet B, or plan B.

It’s understood there is also two buses traveling from Newbridge and there will also be a strong representation from Maynooth at the national climate strike.

Niamh explained the protestors will assemble at the Quays in Dublin before making their way to government buildings where the climate strike protest is due to be held from 1pm to 2pm.

“We want to protest to get the government to reach its target of reducing greenhouse gases to 0% net by 2030,” she said.

Anyone who would like to go on the bus from Naas to the climate strike protest can call 086 3848196.