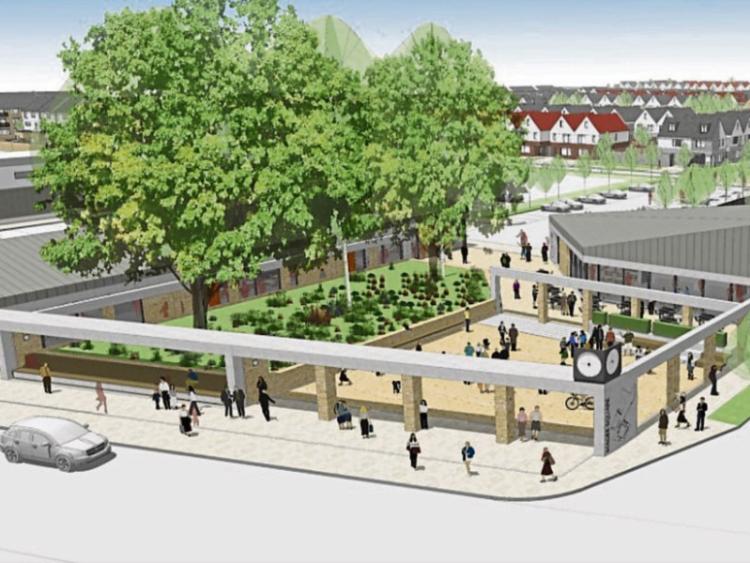 An artists impression of the proposed plaza for Magee Barracks

Kildare County Council has been requested to find a community use for Kildare town’s Lidl supermarket building which will become vacant in coming months.

The retailer is relocating to a new, expanded facility across the road in the Magee Barracks site in December.

A spokeswoman for Lidl confirmed to the Leader that the German discount foodstore doesn’t own the building or its car park on the Dublin Road and that it will be returned to its landlord.

However Mayor of Kildare, Cllr Suzanne Doyle warned that the site must not be allowed to remain empty.

She said the building may be too small for a swimming pool but she suggested it may be suitable for other facilities such as a youth centre or a bowling alley.

The Fianna Fáil politician said: “The site certainly should not be allowed to remain vacant because it has a prime location within walking distance of the town centre and is sitting beside a transport route.”

She added: “I would also welcome jobs such as in a tourism project.”

Cllr Mark Stafford said the site may have to be rezoned in order to be converted into a community use but he welcomed more community facilities.

Cllr Stafford said he has proposed more community facilities in the Magee Barracks site in a submission to An Bord Pleanála in relation to a plan for 375 new homes.

Planning permission was granted in March for the larger Lidl store and construction work began on the Magee site in early July.

The discount retailer has demolished existing structures including the gatehouse at the entrance to the military facility which closed in 1998.

The supermarket will have an internal area of 2,192 square metres incorporating an off-licence area.

There will also be two pedestrian crossing points on Hospital Street as well as car parking and bicycle parking.

Tesco had submitted objections to the store by claiming that the location of the supermarket site would under utilise the potential of the area for urban regeneration.

In a three-page letter, Tesco also argued that the current Lidl store could be left vacant on a long term basis.

Lidl began hiring staff for the new supermarket at the weekend with a Recruitment Open Day at its distribution centre in Newbridge.