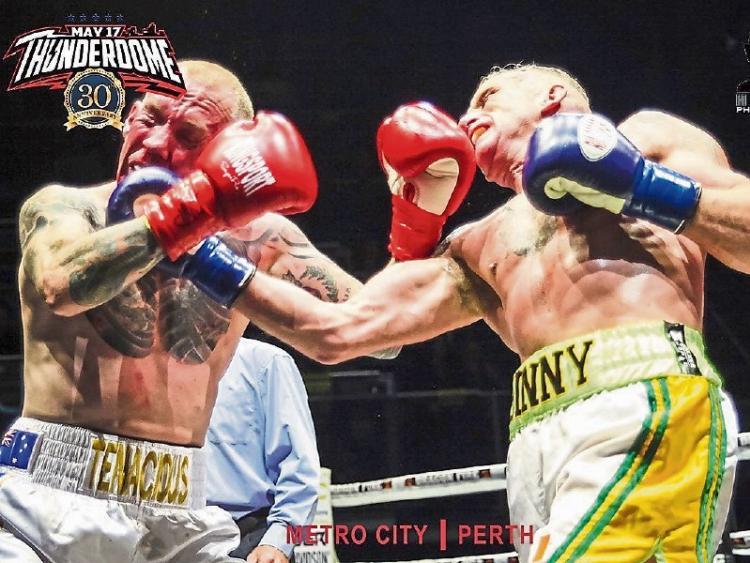 A Naas man returned home recently with a professional title-winning boxing belt he earned in Australia.

He won the title in May by defeating Tony Hawkins, who had been training at the gym run by the legendary Floyd Mayweather in Las Vegas.

The fight took place in Perth and Folan’s win the six round title fight by knocking out his opponent in the final round to win the vacant title.

“It was the pinnacle of my career and the fight attracted a good interest, especially among the Irish community here,” said the former Naas CBS student.

His dad is a retired Defence Forces Commandant Ian Folan a native of County Galway and his mum Noreen is from County Clare.

Binny has an older brother Conor who’s two years his senior and twins Barry and Clare are the years younger than him.

Before departing for Australia 11 years ago, where he works as a rigger (someone who directs the positioning of loads being lowered by a crane driver) he played soccer for a number of locally based clubs and also wore the county colours.

“It was only relatively recently that I discovered that I was better at punching people,” he joked.

There have been no shortage of potential candidates preparing to take him for a title fight.

However but Binny is no rush after putting in an enormous amount of training and preparation to land the title in the first place.

“I don’t have a next step right now. I’ve had my share of injuries, including concussion over the past five years and I really don’t want to end up with any long term difficulties. I think I’ve accomplished everything I can. And I’m 38 now.”

While many professional boxers, often by necessity in terms of fight preparation, don’t lack confidence Folan’s humility is remarkable.

“I was never going to conquer the world,” he said.

Neither has he made a fortune from his timer in the ring and still works in the day job.

“While I managed to attract a bit of attention and got more support than some better boxers, I didn’t really make any money and a lot of what I did went on medical expenses including dental treatment.”

He added: “At times I was the biggest draw, but not necessarily the best boxer.”

The home at Kerdiff Park, Naas