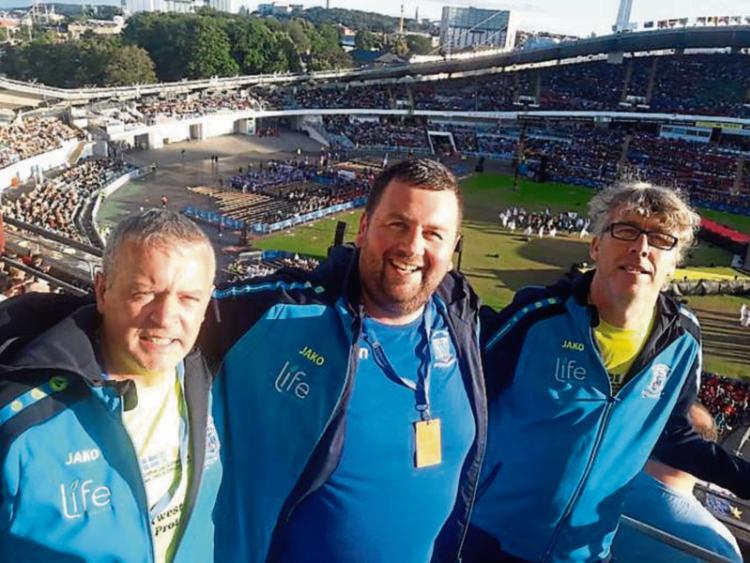 Coaches of the U16s team who recently traveled to Sweden

Newbridge Town Soccer Club has come along way in its 50 year history.

Peter Whyte recalls how they first started out from a cottage in Eyre Street in 1969 with the players having to wash their legs after games at the street water pump.

“Now we have a clubhouse and grounds worth over €2 million and its down to all the people who supported us over the years. Without them we would not have made it through the tough times. The business people of the town really got behind us and supported us, and unfortunately many of them have now gone out of business themselves,” he said.

The club is about much more than just the soccer and the week of events planned to mark this milestone anniversary reflects those community links.

This Sunday there will be a family day at the club with the official opening at 10am followed by a blessing at 1pm for deceased members.

There will be free entertainment for kids including slides, bouncing castles, target games and much more.

On Monday night, September 23 there will be a poker classic with people invited from all the poker schools.

On Tuesday, the regular bingo goers will be delighted with the club’s injection of a €500 boost to the jackpot. A special Mass will be held afterwards followed by refreshments.

The over 35s will be in action on Wednesday night with past members due to arrive from over the country. The match will be followed by entertainment and music in the clubhouse.

On Thursday night, the regular ballroom dance will be expecting an extra large crowd.

There will be a darts tournament on Friday night with pubs and clubs from all over Kildare.

On Saturday 28, the Town’s Cup final takes place. This tournament features the six soccer clubs from the town.

That night, the Keadeen Hotel will host the finale of the week with a special celebration.

Club members, past members and all those who supported the club are expected to attend.

With 500 kids taking part in games every week at Newbridge town, the future is strong.

“It’s going to be a fantastic week and we would like to thank everyone who supported us throughout the years. We hugely appreciate it,” added Peter.