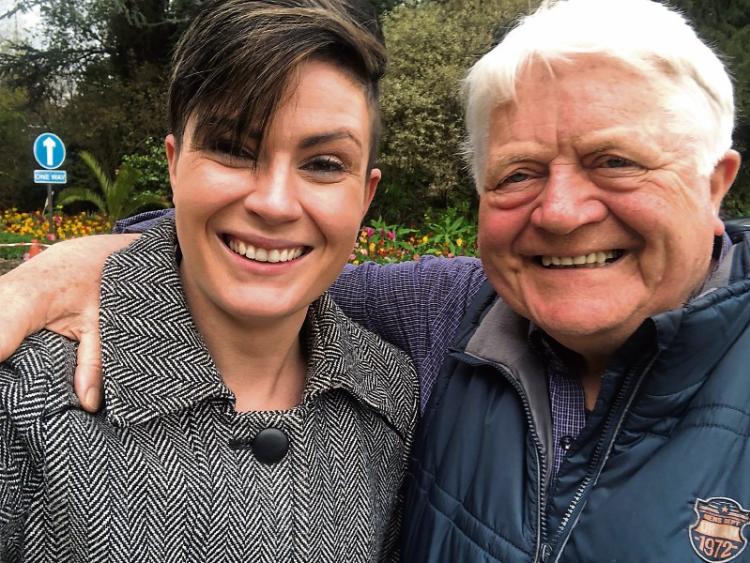 The adventures of Johnny Magory (by Ballinafagh author Emma-Jane Leeson) are continuing with a new book out soon, illustrated by legendary Irish artist, writer, naturalist and presenter Don Conroy.

But as the escapades of loveable rogue Johnny continue, his creator Emma-Jane is embarking on her own adventure.

Emma-Jane (33) initially wrote, and self-published the stories as a hobby.

She fondly remembers stories of Johnny Magory from her childhood: “I had the best childhood ever!

“Always outside, mucked up to the eyeballs and having adventures. Every night at bedtime Mammy would read us a book and then Daddy would tell us a story about Johnny Magory. The story was always just an exaggerated version of whatever we had done that day peppered with talking animals and trees. We always thought that he was a real person and couldn’t wait for him to tell us what the bold boy had done that day!”

As an adult, Emma-Jane spent approximately 10 years in the corporate world working for organisations such as Bord na Móna, the Central Bank of Ireland and most recently Irish multinational giant Kerry Foods, but the nine to five routine and regular travel meant she had never helped her eldest daughter, 15-year-old Lily, do her homework for a solid two week period before.

She realised in November 2018, following a bout of sickness, that she needed to change her lifestyle to suit herself and her young family’s needs.

“It was just flus and chest infections and that kind of thing, but I was out of work for two weeks,” she explains.

“So I decided, I’d just have to change. So I sat down, and I came up with my strategy.”

That prompted the creation of ‘Johnny Magory Business’.

Her plan now is to bring Johnny McGory to the next generation of Irish children — and beyond — through a series of books, journals and merchandise and eventually an animation series.

Essentially she wants to make Johnny Magory into a recognisable international brand, and using it to bring Irish culture and heritage to Irish and international audiences.

“I loved all that business world, but I just got so sick of making millions for somebody else, so I said I’d give it a go myself.

“Lily, my eldest, used to be obssessed with Dora the Explorer, and used to be convinced that she was Spanish and that there were iguanas outside, so I thought, well what’s stopping kids all over the world, speaking cupla focal and thinking there’s going to be a pine martin or a corncrake outside as well?

“It’s just about bringing that whole Irishness around the world. There is no other cartoon doing that at the moment.”

Since becoming officially self-employed on April 1, Emma-Jane and the business have been nominated for two awards, participated in events that quickly rocketed the brand to become recognisable to parents across Ireland and have had social media influencers and celebrities such as Lucy Kennedy, Jennifer Zamparelli and Brian Dowling raving about the books. She was a finalist in the start-up category for both ‘Ireland’s Best Young Entrepreneur’ (IBYE) and won Highly Commended “One-to-Watch” in the Network Ireland Business Awards in the emerging business category.

She has also been nominated to New Frontiers, Enterprise Ireland’s high potential start up programme, which will give her six months of intensive mentoring and access to business faculties in Athlone IT and Maynooth University.

The enterprising author has also held her ‘Heritage and Wildlife’ workshops at events such as Listowel Writers Week, Kaleidoscope Festival, the Laya Health Care City Spectaculars Dublin and Cork, and most recently Electric Picnic to which she brought her bright yellow 1972 Volkwagen Kombi bus.