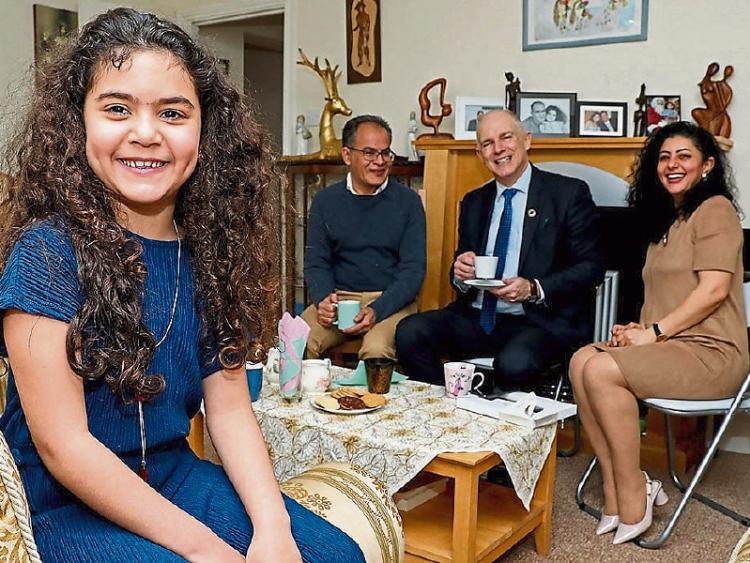 Lorca Fakir with Minister of State David Stanton, and her parents Angham Younes and Zouheir Fakir who are the first refugee family under the initiative, in Dunshaughlin

A group of people from Naas has responded to a call from the government to extend the hand of friendship to a family fleeing from Syria.

It is planned that up to 10 families will be welcomed into Irish communities by early next year as part of the Community Sponsorship Ireland (CSI) initiative .

The initiative aims to provide a sanctuary to people fleeing war and persecution. Community Sponsorship Ireland (CSI) is an alternative resettlement stream to the traditional state-centred model.

The initial pilot model seeks to enable groups within a community to come together to support arriving refugees under a Community Sponsorship Group (CSG).

A Naas resident, Frieda Donohue, was so moved by the plight of these families, she decided to take action and reached out to a number of equally passionate local Naas residents. Together they set up the Naas Community Sponsorship Group.

“I was very moved by the plight of these families and the trauma they have suffered through no fault of their own. Having watched a documentary depicting the horrors of war and devastating effects on ordinary families, I felt compelled to do something. I was very lucky to find nine kindred spirits. We now have a group of 10 very committed and motivated local Naas people who are working hard to develop a resettlement and integration programme for this Syrian family. This is a family who have lost everything and need our help to start again in a safe and supportive environment,” said Frieda.

The project was launched last week and it aims to raise €10,000 to help cover expenses that the family will incur for their education, childcare, medical and other social supports over the first two years in Ireland.

They are also seeking a benevolent landlord, willing to accept HAP payment for a property.

“We are really looking forward to the arrival of this family in the next number of months by which time we plan to have all supports in place.

“We are delighted with the response from the community to date , everyone has been so supportive. It reflects so well on the people of Naas and we’re proud to be part of such an inclusive community. We all feel truly privileged to be part of this very life-changing project,” said Frieda.

The project, being piloted by the Department of Justice and the Irish Refugee Council, provides a framework for local communities to assist a family from Syria to resettle within their community.

More information is available at www.irishrefugeecouncil.ie