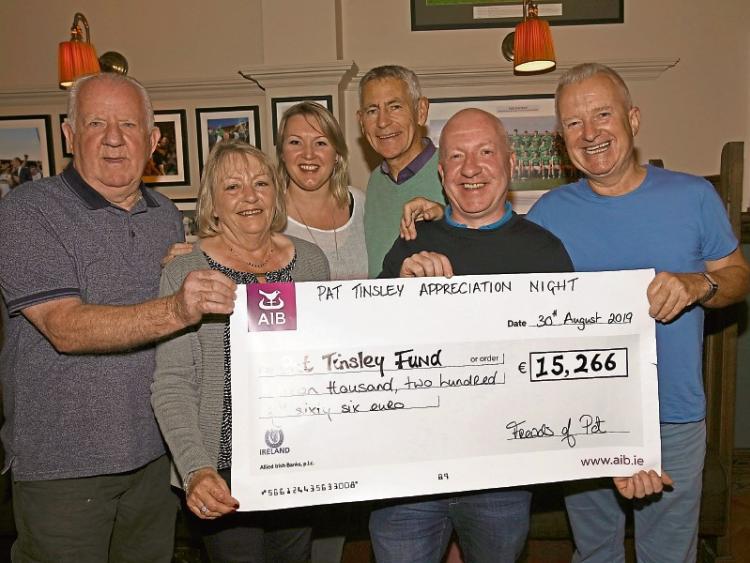 A cheque for €15,266 was recently presented to Newbridge photographer, Pat Tinsley, who was (briefly) silenced but “over the moon” with the community’s generous response, writes Rose B O’Donoghue.

Pat has hATTR (hereditary Amyloidosis) and has recently learned he will now receive the upgraded version of Patisiran here in Ireland, a drug which has presented positive results for patients with Amyloidosis in the UK.

Jackie Tyrell, chief organiser and co-ordinator said: “A special word of thanks to McDonnells for hosting the appreciation night. The staff were tremendous, and it was so generous of the two Erics to donate the profits from the bar. On behalf of Ronan, Eric senior and junior, and all who helped out and supported the night in any way, thank you so much. Go raibh míle maith agaibh go léir!”

A second event will be held on Saturday, 7 December at Toughers Ballroom in Newbridge, organised by Pat’s long-time friend, David Timmons, with the night to feature a ‘who’s who’ of Newbridge entertainment with singers, musicians and a raffle. The line-up will include Lorraine Nolan, Newbridge Musical Society, and the Gospel Choir to name but a few.

Meanwhile Mr Timmons will perform his song ‘Dad’ which is dedicated to his father who recently passed away. “The song is out on itunes now and on the night we’re hoping to sell the CD with proceeds going to Pat and charity,” he explained.

Tickets are on sale later this month and will cost €10; available from the Parish Centre and the Kiosk Flower Shop.