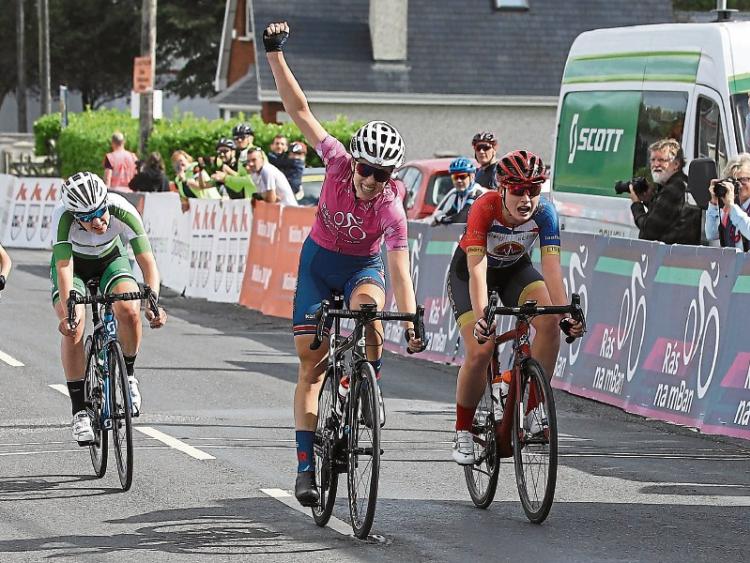 The Rás na mBan was on last week and as this column was being written I’m awaiting the results of the third stage.

Also in those two stages, we’ve seen a number of Irish women, in particular Alice Sharpe of Team Ireland, the current Irish champion, moving up the ranks on GC, and getting third place to boot.

So far, the biggest takeaway is that Irish women’s cycling is coming good, with a lot of quality and exciting names to watch over the next few years.

Josie Knight herself, grew up in Dingle and trained and competed on the track with our own Caroline Ryan on the Irish programme.

Some years ago she left the Irish scene and transfered her alliegance to the UK, where she has family links.

I understand, from talking to the people closer to the scene than I, that she remains well liked on the Irish peleton and people are delighted to see her doing well.

“There is no animosity,” an informed source told me, just a terrible sense of the tragedy of letting somebody as talented as that go.

“Her moving to GB may have brought around much needed changes in the Irish set up,” my source tells me,

“It’s too late but still a move in the right direction.”

She is only 22-years-old and I suspect she’ll be one of the biggest names to watch in the future.

That being said, there is plenty to look forward to in terms of Irish racers.

Alice Sharpe was best of the Irish on Thursday, coming third behind Knight and Elinor Backstedt (a daughter of big Magnus).

She was, for a while, part of the Irish track set up but in more recent times has started racing with a UCI team, a sign that she’s well regarded presumbably.

Then there’s Maeve Gallagher, a 17-year-old rising star, who at the time of writing was in fourth position, just outside the medals.

Stickybottle’s report from the day suggested they were well impressed with the two Irishwomen who had made their way into a breakaway that day which managed to gain almost five minutes on the main peleton.

Baring disaster, we can assume that the overall winner of the race will come from that group, which also includes Knight, Backstedt, Natalie Grinczer and Claire Steels, both of the UK based Brother team.

A friend of mine did the Rás a couple of years ago and it was abundantly clear to her that there really were two races going on there, one between all the foreign professionals, and one for the rest.

The Irish had a race among themselves, and, with the notable exception of Olivia Dillon, a US based professional racer, the Irish racers just didn’t appear to be up to scratch.

That’s not to say my friend didn’t enjoy it. She certainly did, and on the last big climbing day of the race she, being of petite stature, managed to get herself well up the ranks from 76th to 51st, which she is very proud about.

She wasn’t even one of the most dedicated racers on the Irish scene and she managed to come away with a result she could be proud of. Which, ultimately says as much about the quality of riders turning up for the race as it does about her.

Our own Caroline Ryan always took part in the race and played a part in Olivia Dillon’s win in 2013.

But things are looking brighter now.

Internationally our track team is breaking records and showing the world that they belong on the world stage, such as Orla Walsh, Mia Griffin, Imogen Cotter, the aforementioned Alice Sharpe, Eileen Burns, Lydia Gurley and Lydia Boylan, Robyn Stewart, Shannon McCurley, and more.

And many of that group are starting to appear in the road races more often.

Lydia Boylan for instance is a medal winner on the track, and at the same time raced with WNT for two years (as did Josie Knight) before WNT went big time by signing Kirstin Wild and others this year. Then there’s Lara Gillespie who is happy on the track, in the mud tracks of cross and on the road, and is starting to win medals on the track at international level.

Maeve Gallagher is another huge name to watch. She came fourth on stage two and ended the day in fourth overall. She in exalted company there. The strength of the Irish women’s scene threw up an interesting connundrum.

Sallins man Brian Hammond, who manages the Leinster Team, was telling me that because Irish women’s races were, relatively speaking, smaller in size than either the men’s or women in other countries, some of them were struggling to live in big peletons. For this he recommended that they go racing with the men, which isn’t a bad idea, all things considered.