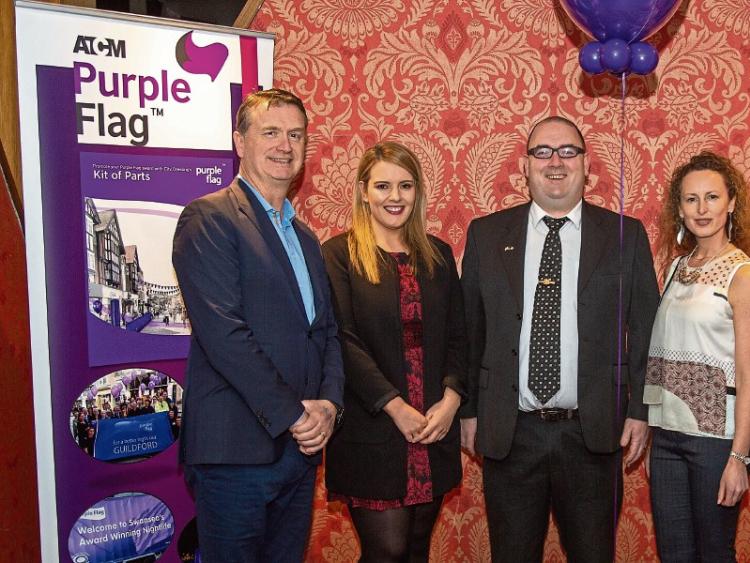 A new working group has been set up to promote Naas nationally and internationally as a must visit destination.

It follows the granting of a Purple Flag to the town for its evening and night attractions after a thorough assessment under the theme areas of wellbeing, movement, appeal, place and policy.

Naas became the second County Kildare town to be awarded the flag, along with Maynooth.

The flag is awarded to towns that offer a well-managed, diverse, entertaining and enjoyable evening and night out to residents and visitors.

The campaign for the flag was supported by County Kildare Chamber and Kildare County Council and it succeeded after an 11 month campaign.

The town was deemed to offer the highest quality in shopping, dining, pubs and entertainment.

Cllr Bill Clear is the new chairperson of the working group.

“We are delighted that Naas has been awarded the Purple Flag status in recognition of our dedicated efforts in promoting the night time economy in the town,” said CKC’s Chief Executive Allan Shine.

“We are very proud to fly the flag, reflecting the strength of ongoing partnerships and engagement with residents. We look forward to promoting the flag, and will use it as a stepping stone in our continuing development of a vibrant and safe night time environment for our businesses, residents and visitors alike.”

Some 28 other towns and cities in Ireland also have the flag.

CKC, which represents businesses, say it will lead to increased revenue in hotels, bars and restaurants along with golf courses and leisure amenities.

“We are seeing a closer alignment of the retail and hospitality industries, and the lines between the traditional day and evening economies are blurring.”

He added that if towns and cities are to survive and thrive in the 21st century, they must meet the expectations of both visitors and our indigenous population.

“To achieve that goal our town centres must be professionally managed and promoted.

“Those towns thaat are well structured and organised will be best placed to meet the serious challenges that we will face in the coming years.”

Other towns with the flag are Bray, Sligo and Killarney.