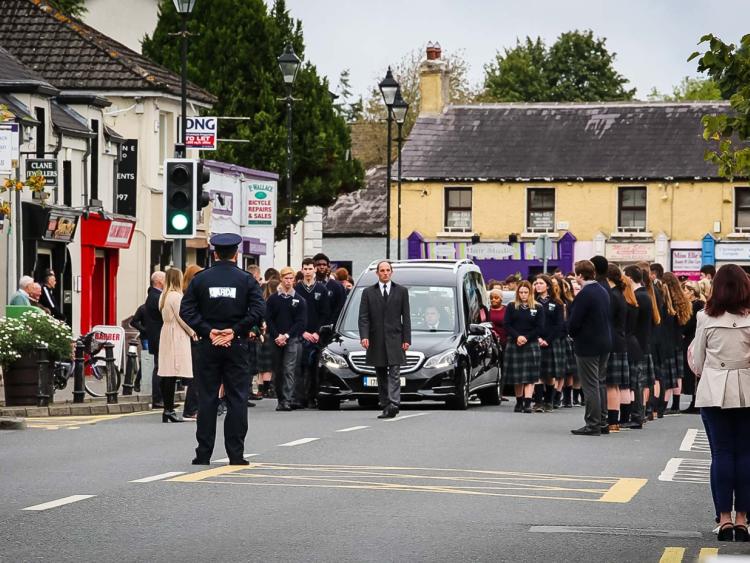 Clane's Main Street came to a standstill for Ade's funeral

The main street of Clane came to a silent standstill for a few moments last Saturday morning for the funeral of 15-year-old Clane schoolboy, Ademidun (Ade) Adeleke who died after taking ill in the gym at Scoil Mhuire school last Tuesday.
His classmates, all in uniform, formed a guard of honour for the schoolboy, described by school principal Padraig Nolan as a diligent student who had a great passion for athletics, soccer and Liverpool football club.
Clane locals, friends and local gardai observed a dignified and respectful silence as the hearse was brought into the entrance of The Church of St Patrick and St Brigid.
The ceremony in the church was an ecumenical one.
Ade and his family are members of the Open Arms Community Church congregation. Fr Paul O’Boyle welcomed everyone regardless of their faith, saying that the church was God’s house.
The congregation was addressed by school chaplain Pat Breslin who described Ade as “a treasured member of the school community.”
He added: “His quiet and gentle approach to life was guided by his love of scripture.”
His other love was of Liverpool football club.
“We as a school community will forever hold Ade in our hearts and thoughts.”
There were also readings from school mates and Ade’s sister Eniola. And his father Bayo spoke briefly to thank all those who had reached out to help the family since the death of his son.
“Ade was a son which every parent would wish to have,” he told the packed congregation.
“He was an angel. He brought peace, love and comfort to us for the 15 years he was with us.”
Pastor PJ Booth addressed the congregation, highlighting Ade’s love of scripture which, the pastor explained, Ade read from every night. He assured the congregation that Ade was now with his saviour, Jesus.
Following the service, Ade’s remains were brought to Mainham cemetery for burial.

A family friend told local media that the parents and family of Ade wish to thank the following people: Fr Paul, Pastor PJ and Pastor Sean, Reilly’s Funeral Home, Padraig Nolan, the principal of Scoil Mhuire where Ade was a student; as well as the pupils, teachers and staff of the school, the Lonesome Boatman pub who provided catering after the funeral, the residents of Clane and the residents association of the Ottomy Estate where Ade’s family live.
They also thanked Marron’s chemist which has established a donation box in their premises, and all those who have reached out to the family to offer their support and condolences including the Open Arm Church, Clane Gardai, all the medics and doctors at Our Lady’s Children’s Hospital Crumlin who cared for Ade.