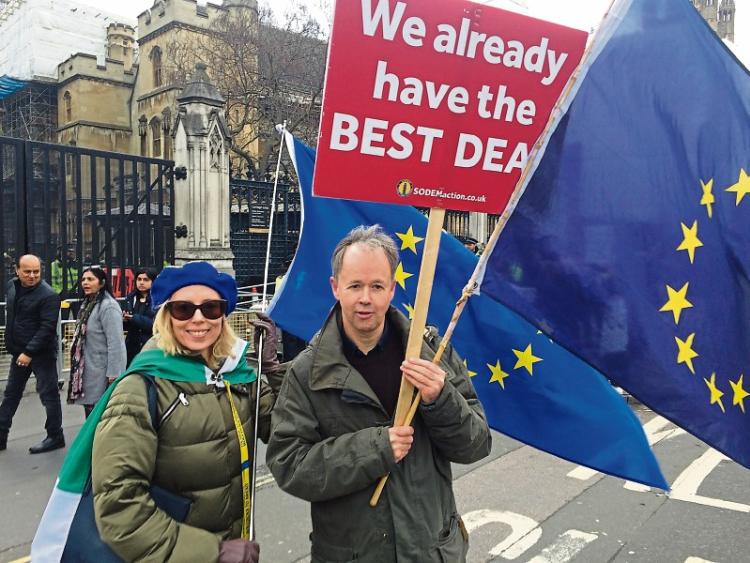 Naas man Peter Benson continues to protest against Brexit at the Houses of Parliament and at Downing Street. In the searing heat of more than 35 degrees in London during summer and since then, he has been accompanied by other Irish friends from Newcastle and elsewhere — all anti-Brexit campaigners.

Mr Benson featured in the Leader in April and more recently he penned an article for The Irish Times during which said the bonds that unite the protestors are strong.

“Carrying an Irish flag outside parliament and Downing Street is not without some risks, we often get abusive comments, and regretfully on one occasion I needed police protection. But how can a placard that says ‘No Border No Brexit Just Peace’ be so provocative?” he asked.

Besides some negative reactions, their presence was welcomed by many.

“We are standing up for our kids’ futures, our jobs, diversity, the environment, the ability to access the European Erasmus education programme, and even the most basic of human needs — access to European Health Insurance Card. The card is so vital to the elderly Irish here in the UK, who are part of the reason why protesting is so important to us.”

He believes the reason for so many others to protest is what the Irish flag represents in the heart of London.

“We are standing up for the Good Friday Agreement, and all the rights and benefits this represents to the people of Northern Ireland. We have educated hundreds on what the agreement means, talked to international media and the permanent protest teams who turn up every day.”

Sinead Walsh from Kill, has also been demonstrating and believes Boris Johnson “has filled his cabinet with hardliners determined to deliver a kamikaze Brexit”.