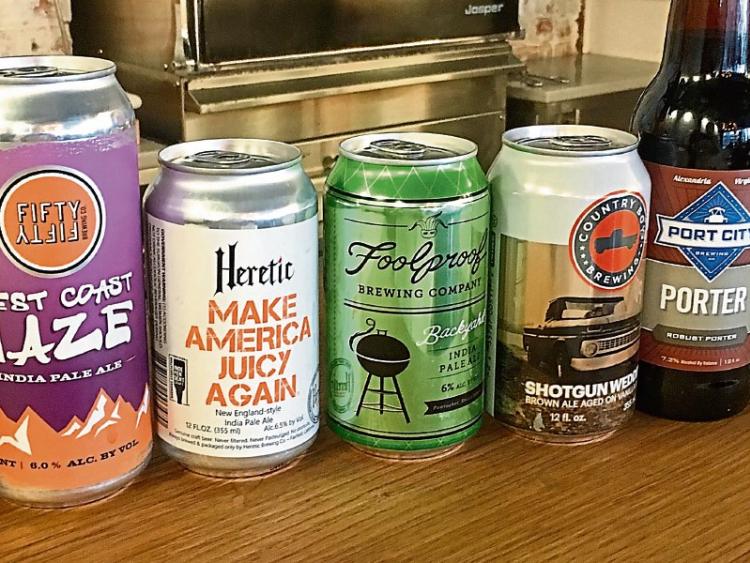 Craft beers can be paired with food

There has never been a better time to drink beer in Ireland. The range of beer styles available from Irish craft brewers is the most diverse it has ever been, and with approximately 75 breweries on this little island, we are surely spoilt for choice.

So why, when Irish craft beer is so delicious and readily available, are there not more people actually drinking it?

According to the most recent Board Bia data, craft beer accounts for just 2.8% of the overall Irish beer market and it is believed that this already tiny percentage is shrinking.

This is a truly miniscule slice of the industry for the number of breweries we now have to survive on. For the sake of Irish craft beer something serious needs to happen.

It is true that Irish alcohol sales in general have been consistently dropping over the past decade and are down about 23% from 10 years ago. This is not a trend isolated to these shores.

In western countries, people are now drinking less alcohol than they were. Yet, there are sectors of the industry that are bucking this decline. The Cider Association of Ireland this year launched their first market report since 2012.

It shows a small but significant, growth of 0 .5% for cider. This has been attributed to the successfully launch of new cider brands such as Appleman’s and Orchard Thieves, which have introduced new consumers to the category.

Maybe Irish beer drinkers are simply conservative and don’t want to drink a different beer? Evidence proves this is simply not the case.

Last year Diageo’s net beer sales rose by 3% in an increase they attribute to by the launch of Rockshore lager and the continued growth of Hop House 13. More significantly, within six months of its launch, Rockshore lager commanded an astounding 1.6% of the total Irish beer market! One single brand. The total number of craft beer producers hold just over one percent more! This is shocking and deeply troubling.

So how should Irish breweries respond? Recently we attended a lunch hosted by the Brewers Association. The BA is an American trade group of over 7,200 brewers, breweries in planning, suppliers, distributors, craft beer retailers, and individuals particularly concerned with the promotion of craft beer and homebrewing.

It works to promote and protect small and independent American brewers, their craft beers and the community of brewing enthusiasts. Its roots are in home brewing; founding members lobbied to change legislation to legalise home brewing and thus opened the gates for independent breweries. Now more than two new breweries open every day in the United States and 90% of the population live within 10 miles of a brewery.

Most importantly, in 2018, independent craft beer accounted for 24.1% market share — a 7% growth over 2017. Craft beer is a very valuable growing sector of the American beer industry, the total volume of craft beer produced in the United States is 13.2%.

Craft beer consumers in the Unites States are willing to pay more for the beer they drink.

So what can we learn from our American cousins? The BA is committed to education both for its members who brew and produce beer, but also consumers.

We attended a pairing lunch designed by the BA chef Adam Duley to highlight the gastronomic potential of beer. Positioning beer on the fine dining table sparks a paradigm shift, which encourages people to think differently about beer and to try new styles. By elevating beer to the perceived level of wine, there is a place for incredible beers that are best with food rather than by the pint-full.

Adam described using beer as the sauce for a delicious dish, and advises drinking it alongside your meal with that in mind.

Highlighting the craft and care that goes into making these beers and aligning beer with a top-class restaurant experience is something we would love to see more of in Ireland. To support beer in restaurants, the BA produced a study that, contrary to popular belief, showed that when there is a good beer selection in restaurants, people tend to spend more on alcohol over the course of their meal compared to when there is only wine available.

The BA also offers ongoing training and upskilling for its members, which ensures beer of the highest quality.

We can take some inspiration from the BA but for our craft beer industry to survive, simply put, more people need to drink craft beer. We understand that distribution and visibility is a challenge and that established macro breweries are reluctant to give up any of their market share, but imaginative ways around these obstacles must be found.

As we near the end of a summer of festivals, could a plan could be put in place for next so that Irish craft beer is available at more events throughout the country?

Craft beer doesn’t have the financial resources of larger beer companies so to offset this, local political systems should be leveraged to support independently-owned, small, local businesses that provide employment to the community. This would be a step towards exposing more people to delicious Irish craft beer and maybe give the industry a much-needed boost.