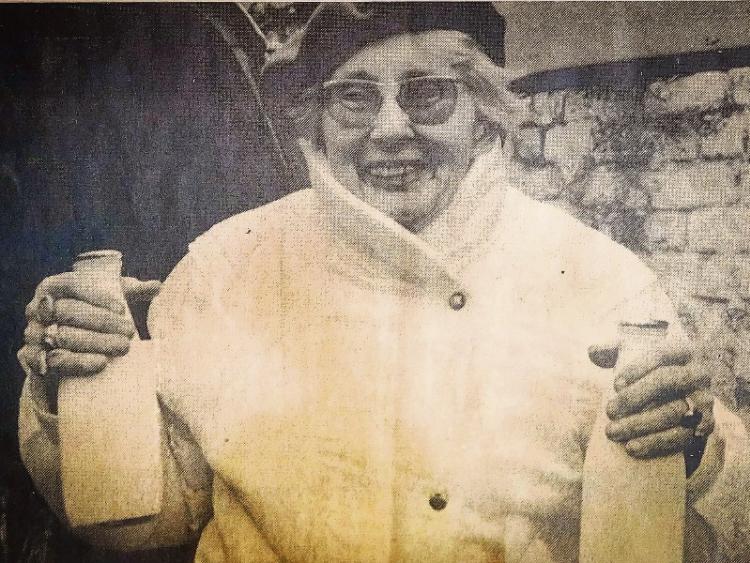 Mrs Conway-Behan sold milk from her premises in Naas

Like many other towns throughout the length and breadth of the country, Naas was hit badly during the recessionary times.

But for some reason Kildare’s county town seemed to be hit harder than a lot of others through a combination of businesses closing down, moving out and the massive out-of-town Tesco outlet down Monread way.

However last week we, hope-
fully, may have seen a major sign that the centre of Naas is about to fight back and become what it used to be, a hub of activity for shoppers, diners, visitors and all the other ancillary activities that one expects of a county town.

Strange how the auld mind operates, probably an age thing, but last week mine took a wander; back to the days before multiple supermarket chains existed. Back to the time when milk was delivered, not in a carton or a bottle, but by local farmer Mick Morrin, using a ladle that held exactly a pint, and was poured into each customer’s container.

No carton, no bottle, straight from the milk churn into a jug, or whatever. No health and safety issues, either. And we all survived.

Speaking of milk and bottles, folk from Naas would readily remember an extremely hardworking lady whose premises was situated beside where the new Dunnes Stores has just opened.

Mrs Conway-Behan; a lady not to be taken lightly, who sold milk, amongst other items, but only on one condition. That being, to purchase a bottle of milk, you had to have an empty bottle.

It may sound strange, even archaic to many of today’s generation, but the bauld Mrs Conway-Behan had a sign on the door that left no one in any doubt as to the terms and conditions she would part with a pint of milk.

And as one who had the pleasure — well maybe the word ‘pleasure’ is the wrong word, possibly ‘experience’ would be a better way to describe it — but if you entered with no bottle seeking to buy a pint of the white stuff, you would get two barrels from the lady behind the counter.

Now if you had the willpower to stand your ground and plead your case, she might, just might, relent and part with a bottle, but the next time you were looking to buy a pint of milk, you would only enter Mrs. Conway-Behan’s premises if you had an empty container.

Of course, nowadays with everyone in a hurry, rushing here, there and everywhere, one stop supermarkets can be a blessing in these hectic times.

Yet there was something very special about the grocery shops from a time in a different era.

Shops such as Mulvey’s; McKiernan’s; Burland’s and Foxe’s (now Larry Swan’s On The Green).

Burland’s, owned and managed by George, was the first self- service store I can recall in Naas.

Self-service may sound strange, even amusing, but back then you brought along your shopping list, handed it in to the person behind the counter, and you either waited or returned later, when your groceries would be ready for you in a big cardboard box that had been recycled, having originally been used to deliver supplies to the said shop.

Hands up those who can remember Burland’s revamped shop opening with the big sign outside: Self Service.

Everyone from Pacelli Road, Sarto Road, Our Lady’s Place, not forgetting St Gabriel’s Place (or as we used to call it ‘The ESB Houses’) did their shopping nowhere else; apart maybe from Molly Lagrue’s small shop on the Caragh Road where you got the best (and biggest) wafer ice-cream, bar none.

Burland’s was not, by today’s standards, a big shop, but the fact that a customer could actually go around and pick up groceries from shelves, place them in a basket provided, before going up to the till and ‘settling up’ with who ever was in charge of payment, was new.

Many shops worked a ‘book’ system, especially for mid-week supplies. No cash would change hands, for one very good reason — you had no cash mid-week.

It worked perfectly well, but there was often a problem when an extra item was spotted on the list when the bill was being settled. Items such as a toffee bar, or maybe even a loose fag.

Trouble, lots of it.

Then there were the butcher shops; Miley’s and Pattersons spring to mind instantly; not forgetting Charlie Herterich, near the Post Office. Charlie dealt exclusively with pork meat.

We had the various sweet shops such as Rooney’s, Harney’s, Comerford’s, the aforementioned Molly Lagrue’s, not forgetting my auld favourite Sarah Flood’s. Not alone would you get a loose fag from Sarah, you would also get a light. Free gratas.

Ah yes, we have come a long way.

One thing for sure, though, while we all miss the old groceries and the sweet shops, to see Dunnes Stores open on the Main Street of Naas can be nothing but positive, nothing but a major boost to the town, to the retailers, to the shoppers, to everyone. Last week could, in fact, be the catalyst that sees Naas return to the vibrant town it once was.