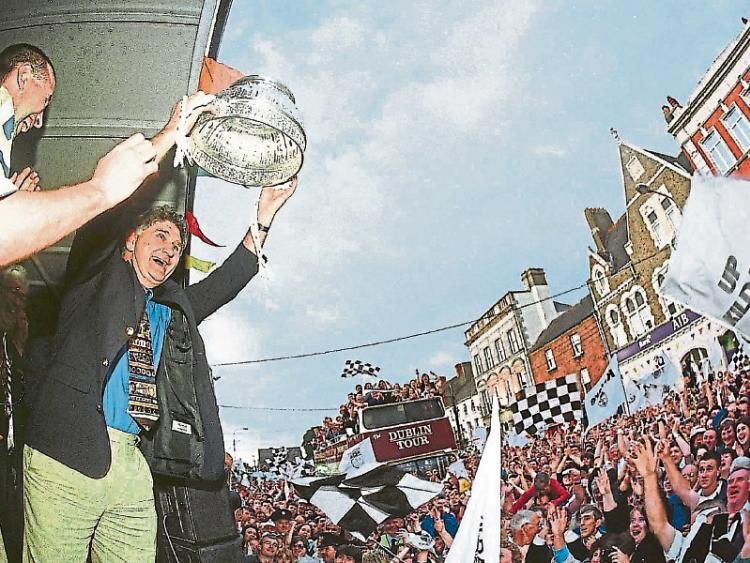 Kildare manager Mick O'Dwyer raises the Leinter trophy as the team are greeted byu thousands of fans at their civic reception in Naas in 1998. Picture: Adrian Melia

The recent appointment of Jack O’Connor as Kildare manager pointed a recent pub conversation back in the direction of his fellow countyman, Mick O’Dwyer, who, of course reigned over the Lilywhites throughout the ‘90s and early 2000s.

We fast agreed that the success and infusion of energy Kildare enjoyed during ‘the Micko years’ means this county’s supporters will always be well- disposed to another Kerry manager.

But aside from the hatful of All-Irelands he won as a player and a manager, we wondered what it was about Micko that continues to makes him part of the energy of the place?

The first time I saw Micko up close, it was in the back of The Ivy Inn pub in Naas in the early 1990s.

He’d been here a few months at this stage and that day he was alone, eating a plate of food you could climb, and buried in a broadsheet newspaper.

I reckon I did about 10 fly-pasts of his table.

It was kinda like that Motown movie 20 Feet From Stardom. But there was no stage or glitter-ball lights, just what felt like a higher being sat having a lamb lunch by the toilet.

A couple of months earlier, in a wildly different setting, Micko had climbed the steps of St Conleth’s Park to the acclaim of a captivated audience.

The same afternoon Naas beat Clane in the Kildare SFC Final and Johnny McDonald was imperious, according to the archived match reports. But good as Johnny was, he’d to battle for the spotlight that day with the Caesar-like grey-suited figure up in the stands, waving out of his new Coliseum, surrounded by committee men.

Micko’s guest appearances would become a feature of county life in the years that followed. The Kerry great popped up here, there and everywhere — opening new GAA halls, new restaurants and new pubs. He’d arrive in, smile easily and then cast that quiet engaging spell of his across whatever the venue.

The one time I experienced it, years later, I felt I was being told the secrets of the world.

But then Micko was someone who could tamper with the school calendar and get away with it.

He came to St Corban’s Primary School in Naas during that first year as Kildare manager to hand out the medals for the annual sports day.

The reception was just reverential. Thinking about it now, the only sporting figure who might have had a squeak of eliciting a similar response was then Republic of Ireland manager, Jack Charlton. But it’s a tough call.

This strange quietness descended on the school yard. We music have been shi**ing it, stricken with terror probably, not to show up the school.

But sensing an opportunity to flip the energy on its head, Micko stood up on a small stage in the yard and, with a casual wave of his hand, granted everyone a half-day.

It was like a cork leaving a bottle of champagne

Pupils tore off in every direction screaming wildly.

Micko would forge this reputation for hard work that, personally speaking, always made me think about Benito Mussolini. We were learning about him then in history class.

It sounded like Il Duce, as he was known, had won the heart of Italy, because he clocked out later than everyone else and all I could think of was Micko’s midnight runs driving from Kildare to Kerry and back again, week in, week out.

While the county slept, there was Micko behind the wheel of the car driving down mile after mile while frantically trying to figure out how to get the best from Bill Sex and yet more brilliance from Buckley.

Of course, there was the mileage expenses and his love of laps too. Associations he’d still do well to escape from, but no one did, the laps.

When he arrived up from Kerry, Micko wasn’t universally known within the county boundaries.

But by the end of his reign, only residents in the furthest reaches of Kildare could hope to deny any knowledge of his influence.

Overnight and over the years the landscape changed and so did expectations.

And even after all these years he remains the toughest act to follow.

Robert Mulhern is a London and Dublin-based journalist contracted to Sky News.