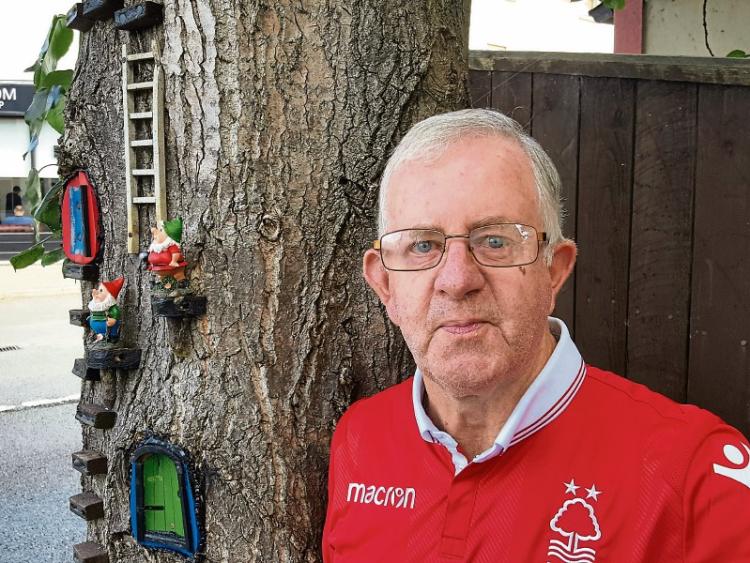 You get love letters, Matt Hayes told us when we asked about the purpose of the little doorways, boxes and fairy figures installed as street art on some of Clane’s town centre trees.

“One lad asked if I worked for the fairies,” he said.

While the community so far has not seen art on its utility boxes, the work of former soldier Matt Hayes, has led to the use of trees for art works.

For some of the town’s people, probably the very young ones, the fairies associated with the work have a special fascination.

Matt, originally from the Ferrycarrig area of Wexford, has lived for 43 years in Clane. He spent 23 years in the Irish army, working as a barracks carpenter in the Curragh, and worked on maintenance at Clongowes Wood College for 16 years, retiring six years ago. Five years ago he applied his skills to tree art.

“It came about by chance,” he said. “A tree in a town had a hole in it and, to improve its appearance, he filled in the hole and put a door on it — without damaging the tree.”

There are now four such trees in the town.

“The kids leave notes,” he said. “A lot of them want to know the name of the fairies. The kids love them. They would stop and ask questions.”

The work he carries out also causes no damage to the trees.

“Some of the art works have been repainted in the five years,” said Matt, who lives in one of the town’s older estates, Parkview.

Along with St Brigid’s and Loughbollard, this was the only estate there when he arrived four decades years ago.