Hamida suffered an abusive early marriage, then was sold into domestic work; 14-year-old Nipa intends to wait until she is 20 to marry, on her parents’ advice 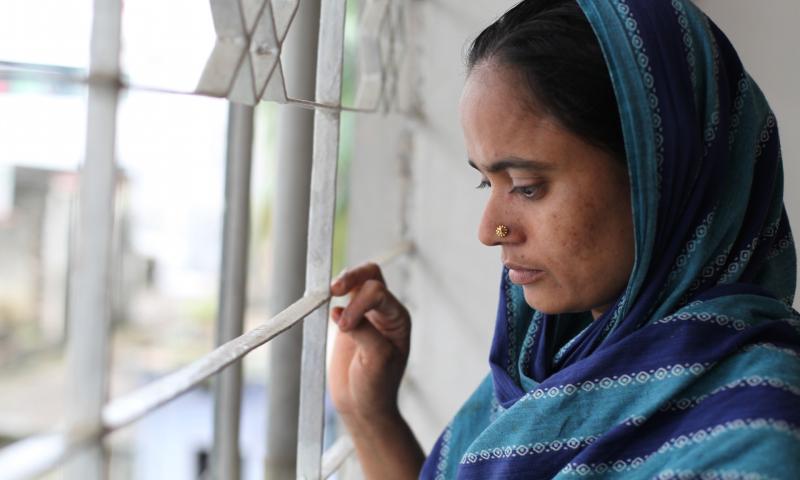 Hamida’s story
“I started working when I was seven years old,” says Hamida Begum, 30. “My first job was in the house of a big farmer who had a tailoring shop. I only got food, no payment.”

Since Hamida was not bringing in money for the family, her parents forced her to marry. Her relationship started with severe physical abuse. “He bound me with rope to a tree and beat me with a metal rod. When he tortured me, I was two months’ pregnant. Sometimes he stuck needles in my skin. I still have the scars,” she says.

The police intervened and Hamida returned to her parents’ home. She gave birth to a boy, but when he was 18 months old her husband’s family took him. “I have only seen my son three times since then,” she says.

Hamida attends a training course run by Oxfam and its partner Nari Maitree in Dhaka – it focuses on skills such as cooking and food hygiene, but the sessions also offer a chance for women to meet, build confidence and understand their rights. “I come to learn something different,” she says. “I now get extra wages from my employer. I negotiated with them, explaining that my family is poor – and they agreed to pay me. I now work five days a week and things are better. I get 4,700 taka ($60) per month and proper food, and my employer is better behaved … I get strength and courage from friends in the slum and women here at the training course. I can raise my voice now.”

Hamida remarried and has two children, aged seven and 10. “My husband is sick so I maintain my family,” she says. “My only happiness is through my children. My plan is to help them grow. I want to give them a proper education, and I am succeeding.”