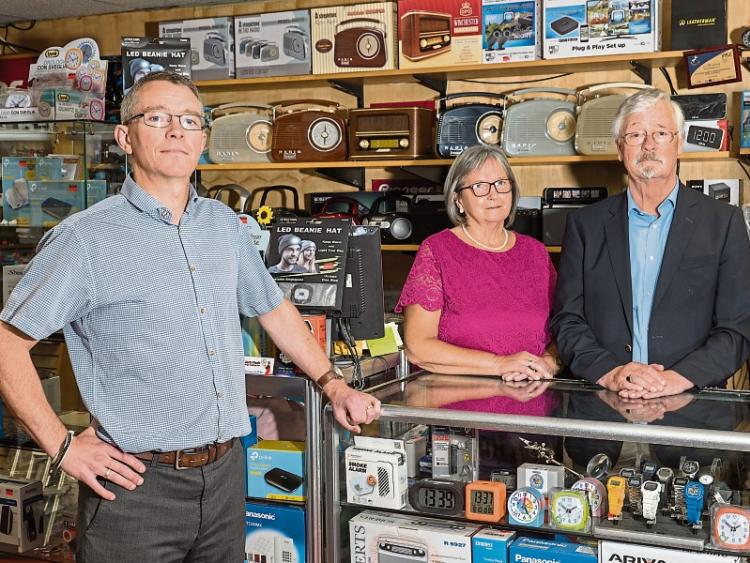 The naming was a homage of sorts to the first ever bike racer to break ‘the hour’ for 30 miles cycled. Like the four-minute mile before it, this test of physicality was once thought to be beyond the limit of human endurance.

And the man who broke it, from Portarlington in Laois, forged strong Kildare connections.

After he’d finished breaking world records, Alo opened a shop in Laois that sold bikes and other items. But this career in retail would later leave an indelible mark on the town of Naas.

Donegan’s on the Newbridge Road closed in 2017, at a time when Amazon Prime’s ambition for world domination and business rates threatened to lay waste to our local economy.

Thankfully, all that talk of retail armageddon proved somewhat premature. Yet it remains a rare occurrence for this column to highlight a business for reasons of durability.

Recently, A Donegan’s on Naas Main Street celebrated its 40th anniversary. That’s a decent chunk of time made all the more significant because in that period, how we consume goods and services has changed dramatically.

When Ambrose Donegan opened his retail business on main street in the summer of 1979, Jack Lynch was the Taoiseach, Aer Lingus had just graduated its first female pilot and the nation was hyped for the pending September arrival of Pope John Paul II in Dublin’s Phoenix Park.

That’s four decades, two heavy recessions and a full 15 years before Amazon registered itself as a business ago.

Back then, A Donegan’s stocked certain goods, which today might find themselves on a listed on eBay’s retro section.

Products like video players with bruising names like Betamax that ended up being outmanoeuvred by VHS, and the Walkman from Sony, which resigned forever the on-the-shoulder silver ghetto blaster look.

And if those goods and that technical terminology now read like terms from another time, then try a namecheck of A Donegan’s nearest neighbours: Rafferty’s Electrical store, Prout’s, Marum’s pub, RTV rentals, Apollo Travel and more recent departures like the Dara Cinema, Mattimoes and Dillons newsagents.

Some will rightly argue that 40 years is no time really, but a closer look at that list of fallen retailers tells you all you need to know about just how much has changed.

Increasingly, independent drapers like Prouts once was have been outdone by mega chains built on the back of cheap labour in the Far East.

Pubs like Marum’s have halved in their number in recent years while the idea of renting a TV is almost unconscionable. Similarly, booking a holiday in a travel agents.

But in the late 1970s and through much of the 1980s and beyond, these were the businesses and the business which coloured our local economy.

Of course, Fletchers was directly opposite A Donegan and its most celebrated story in popular culture is of course the legendary barring of Eric Clapton, and Ronnie Wood from the Rolling Stones.

But to the best of my knowledge, Mr Wood was never barred from Donegan’s across the road from Tommy’s, where he too figures as a famous customer [who knew?] along with Chris De Burgh, the singer/songwriter, Paddy Casey and former Ireland soccer internationals Niall Quinn and Keith Andrews.

I only learned a lot of this recently — and that a shop I always knew for selling hi-fis and tvs originally stocked and sold bicycles — after I contacted them to ask for some of the reasons behind this durability.

I wasn’t expecting anything novel, but isn’t it funny how, matched against that turbulent retail landscape, adjusting to your customer’s needs, and a committing to providing a good customer service has yet to date.