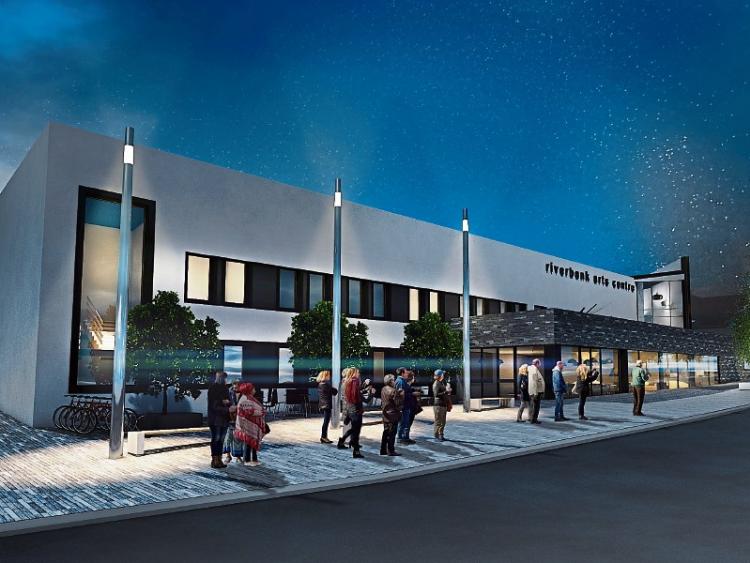 An artist's impression of the vision for the Riverbank

Thousands of people have passed through the doors of the Riverbank Arts Centre in Newbridge since it first opened in 2001.

With a major redevelopment in the pipeline, the centre is hoping to attract many more in the future.

In 2017, the Riverbank was awarded a grant of €1 million from the Department of Arts, which was match funded by Kildare County Council to transform the building on Main Street.

The centre has recently issued an invitation to tender for a design team.

The design brief proposes to reconfigure the layout of the centre to bring the entrance, box office, children’s gallery and workshop onto street level.

The vision is that the centre will be a fully accessible and user-friendly venue, to increase the stage size, and stage depth, and improve the seating and capacity.

The theatre currently seats 180 people, and it is hoped to increase this to approximately 210.

“Some of the key elements of the plan is to improve the seating and the comfort levels within the theatre, to improve the depth of stage and the staging capacity of the theatre as well so we can take in larger tours and production, we’re not limited by the size of the stage,” said Linda Geraghty, venue director. “And then particularly listening to some of the local groups that would use the space to have a crossover and the different staging facilities that they might need for the centre.”

Mrs Geraghty said they don’t want to lose the intimate nature of the venue, which both performers and audiences like.

“What we want to do is maximise the seating capacity as much as possible, to improve the accessible seating within the theatre as well, but also maintain that level of connection between the audience and an artist because it is a unique aspect to it as well.”

Last year, it was announced Newbridge is to get a portion of a €6.3m national allocation along with six other projects under the government’s Urban Regeneration Development Fund.

This will fund plans for a cultural and civic quarter in the town, to include the redevelopment of Kildare Central Library, public realm enhancements from the area around the town hall through George’s Street and Market Square and around main street to the new library building.

Mrs Geraghty thinks this will tie in nicely with the Riverbank’s plans.

“The overall transformative nature of the development will work very well with the plans for the cultural campus here and it is a core part to the development of this area.

“We’re very keen to have that open communication with the street and that people can and do see the amount of work that goes on in here.

“A huge part behind having such a transformative development is to have a flagship space within the town and county, we have a very strong existing audience database and loyal customers but we’re always keen to grow that and to develop that so a lot of our programming strands have that in mind, that we’ve been working towards developing new audiences and engaging as many people as possible, and as a small team with limited resources the transformation of this building will help us to grow and to encourage more people to interact with the arts and culture.”

While the development is underway, the company intends to operate as a venue without walls, continuing to work with the community.

It is hoped the redevelopment will be complete by 2021.