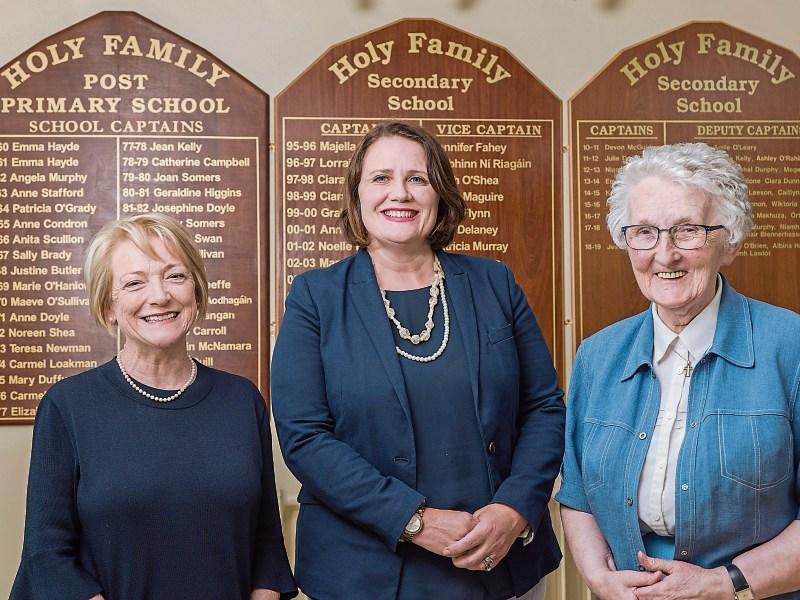 This year, 2019, is a milestone year for the Holy Family secondary school in Newbridge, as they celebrate their 60th anniversary Jubilee.

A special mass will be held for past pupils and staff on Friday, September 6, at 7.30pm, in St Conleth’s Parish Church, Newbridge.

On September 7, 1959, the Holy Family opened its doors as the town’s first secondary school for girls. It was founded by the Holy Family Sisters, and some 75 students were enrolled with a staff of five, including Principal Sr Catherine Moran. Currently, the school has 714 students, approximately 48 teachers as well as special needs assistants and auxiliary staff.

Sr Catherine said she has seen the evolution of the Holy Family, from the time it was a secondary top in 1948 to when it became a secondary school.

The secondary top, as the extra years of post-primary education were called, was introduced by Monsignor Miller, parish priest of Newbridge at the time, as an addition to its existing primary school.

“The secondary top could no longer continue because teachers were paid by capitation, and the numbers in the secondary top were completely affecting the rest of the school.

“I remember one class had seventy-plus girls in the class, and at the secondary top we had six in the Leaving Certificate for example. The overall number in the secondary top was very small in comparison to the rest and the teachers who had degrees got no salary whatsoever. I worked for nothing for four years over there, and it was practically impossible to get any teacher to go on the staff, so we paid them out of private funds from the Convent but it meant they didn’t get any increments so it wasn’t an attraction proposition to have a job in the secondary top. So it became obvious there was no way forward except a secondary school.”

The secondary school began at the East Wing of the Convent, and it grew from there. In 1967, a new building was erected to cater for 240 pupils. This building was only partly financed by the Department of Education, and the pupils and parents of the school raised the balance. By 1976, enrolment figures reached 387. Once again, prefabs were needed to alleviate overcrowding. 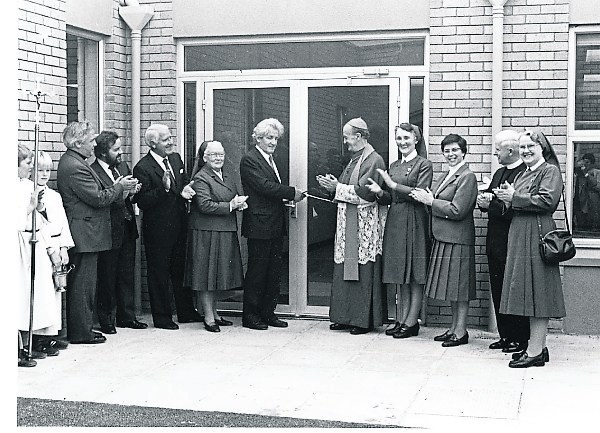 Sr Catherine said that while a lot has changed over the 60 years, the heart of the school is still where it was in the beginning.

She added that she has fond memories from her time as principal. “What I like to remember is the goodwill of the girls — for example, even a little simple thing like caring for one another. This girl fell one day, and damaged her little white socks, and another girl came around and said ‘I’ll wash them for you so that your mammy won’t have to do it when you go home’.

“The strength of the school was the support we got from the town here, it was just marvellous. We produced shows that would not have been possible had been people not stepped in,” she concluded.

Current principal of the Holy Family, Sarah Allen, is going into her second year as head of the school, and looking forward to all the challenges it may bring.

“To be family and build family is as important and central to who we are, the fabric of our school and the tapestry of who we are over the last 60 years; as much as it was in 1959 as it is today,” said Mrs Allen.

She added that the growth and success of the school is down to the work of staff, students, parents and the wider community.

“It’s a huge testament to my predecessors, not only in the role of principal, but to anyone who has ever had a helping hand in the 60 years of the school’s history. That’s why it’s so important to celebrate together on the 6th of September because it’s a chance to look back, to pause and reflect and appreciate and celebrate all that has gone before us.”

Teresa Brophy (née Newman), chairperson of the Board of Management, past pupil and 1973 school captain, said her role as chairperson is now a way of giving back to the school where she spent years of her life.

“I have very happy memories of my time in the school. Sr Catherine mentioned the musicals — I was here during those years and there was Calamity Jane and Oklahoma! They were all fantastic shows and they helped create a lovely atmosphere in the school. I find when I come through the front door I still think you get a flavour of that lovely atmosphere,” she said.

“We will come and go, the school will always be here, it’s a privilege to be part of that history of the school.”

Mrs Brophy said there has always been that willingness to help in the school, and great support for the Board.

Sr Kate Cuskelly, school chaplain, says it has been important to keep the connection with the convent over the years.

“Our intent here above all is about faith development for the girls, because obviously it’s a Catholic school, our Catholic ethos is very important to us.

“Our own founder was Pierre Bienvenu Noailles, and one of his aims, when we started as a congregation nearly 200 years ago, was that we would be people that would spread and extend the faith in all classes of society.

“So his vision at the time is very relevant today, and that’s what we’re trying to do here.”