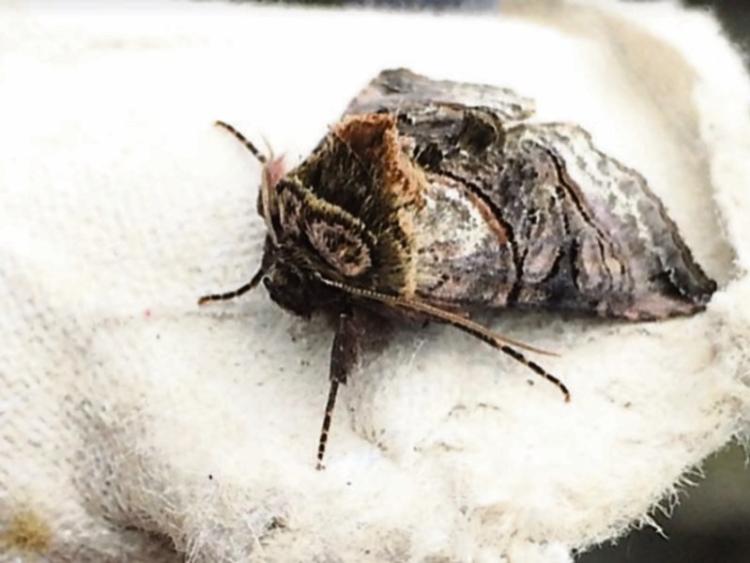 Following on from last week’s introduction to the Buff Tip moth, another species that was caught, identified, recorded and returned to the wild during a recent moth workshop hosted at the Bog of Allen Nature Centre was the Spectacle Moth.

I am sure you could suggest reasons why this moth is so called — maybe it has something to do with the fact that it looks like this moth is wearing goggles! Although this species is considered a common moth one, I am not as familiar with it as I would be with other varieties of butterfly species in Ireland. Maybe this is due to the fact the Spectacle Moth is noctural in nature.

This moth is in flight between May and August each year, and they can be found in open woodland hedgerows and gardens.

The moth wings are mottled grey, cream and brown with a black central band towards the thorax.

The thorax is the body part of the moth that supports the wings and legs and, in the case of the Spectacle Moth, is covered in hairs which are piled up into a turret towards the back of the head.

The caterpillars are green in colour, and, once grown, they pupate and overwinter until the following year, when they emerge as adults. The adults will feed on the nectar of flowers including valerian and sage.

Have you ever heard that the difference between a butterfly and a moth is all in their colours, that moths are dull while butterflies are bright? Next week I hope to dispel that myth, as I introduce you to one of the most brightly coloured moths in our community.