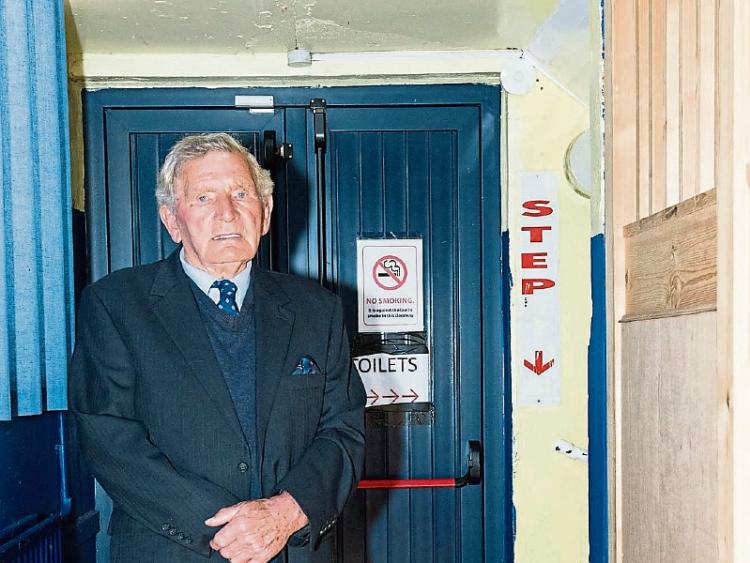 There were hundreds of them, Irish bands of every size, description and musical genre, travelling the roads and boreens of Ireland.

They travelled the length and breadth of the country from the 1950s through the mid 1980s. Although ‘officially’ the term show band was coined in the late fifties and was used to describe bands that played a wide variety of music and usually included a ‘show’ during the night, the term was gradually applied to all the bands that played in the 1960s.

However, the famous Gallowglass were a regular and popular booking to the CYMS hall. The programme of 1952 boasted a maple floor, electric heating, a mineral bar, running buffet, the latest ‘tannoy’ sound system, and car and cycle park with attendant.

The resident Master of Ceremonies was HO Darling. Dancing from 8pm-12 midnight, with admission just 15p!

Tom Dunne a native of Mooretown Kildare, was born in 1931, and was the resident ‘door man’ in the CYMS Kildare for over twenty years. He was engaged in the early years by Fr P Mac Suibhne, who like a lot of parish priests of that era used local dances to fund raise for schools and churches within the parish.

Tom’s Saturday nights duties, on strict instructions from the parish priest, was to ‘keep the peace’. Ladies and gents, came from near and far. Dancers in the early days arrived on bicycles, and a numbers of patrons arrived in cars.

The local tennis club was another venture where the parish priest arranged ‘hops’ (discos) and Tom’s expertise was required at the door of the Tennis Club also.

Tom recalls that the tennis club attracted a “different type of clientele” and on occasions when diplomacy did not work in refusing entry, Tom had to revert to ‘plan B.’

As time progressed Liam Ryan, a Dublin based business man, through the CYMS committee, commenced engaging the services of some of the top bands in the country.

This move put the CYMS hall on the map as the place to go to for Saturday night dancing entertainment. Tom recalls in the great many years he worked on the door, bands and performers such as, The Dixies, Hank Loughlin, The Cowboys, Sean Dunphy, The Dubliners, The Mighty Avons, Big Tom, The Capitol Show Band, Larry Cunningham, Tony Kenny, The Tremelos, Slim Whitman, Roy Orbison.

One of the greatest performers of Tom’s time played in the hall to a box office sell out was none other than the great Slim Whitman.

Tom remembers, one of the largest crowds were in the CY hall the night Slim performed. The great Joe Dolan was another huge crowd puller and he lifted the roof with all or most of his popular hits.

Liam Ryan was strict on dress codes, and long hair on young lads was a no no. Ladies in trouser suits were also refused entry. This strict rule for the ladies caused mayhem one Saturday night when a lady presented at the door to get in dressed in a trouser suit.

Tom cited the dress code of the management and told her to go away, she politely obliged and went back to her car. A short time later Liam Ryan came out to Tom at the front the door to ask had he seen Margo as it appeared she was running late to come and perform. Margo was duly escorted from her car to the ballroom where she was top of the bill for that night’s dance! Tom recalls young lads going dancing back then lacked social skills, and while the only bar in the CYMS was a mineral bar the odd pint was downed in the local pubs to give the chaps “dutch courage” to cross the hall and ask a young lass out to dance.

Tom Dunne has fond memories of his years on the door in the CYMS — The friendly and not so friendly characters he encountered. Tom kept himself fit and for years followed the Charles Atlas body fitness technique. Tom was a keen boxer, the skills he learned in Kilcullen Boxing club served him well in dodging the odd left hook!

Tom confirmed that the CYMS was a pleasant and safe place to do door security.

“There was no trouble or knives pulled on anybody,” he said.

People were out for a nights entertainment, where love story’s began and future marriages in some instances. The showband era rapidly declined and the Ballrooms of Romance closed one by one across Ireland. Tom’s work as door man finished up in the mid eighties after spending over twenty years ‘keeping the peace’.

Cill Dara Historical Society in recent years has brought back to the CY a number of hugely successful country music shows as part of heritage week. The next show which was booked out days after it was announced, will take place on Friday, August 23, in the CYMS hall. The performers are as follows: Ryan Turner Band, Olivia Douglas, Ray Lynam, Crystal Swing, Tony Kerr, Tomas McGuire, Fionna Ennis. MC for the night will be Liam Kett of KFM.