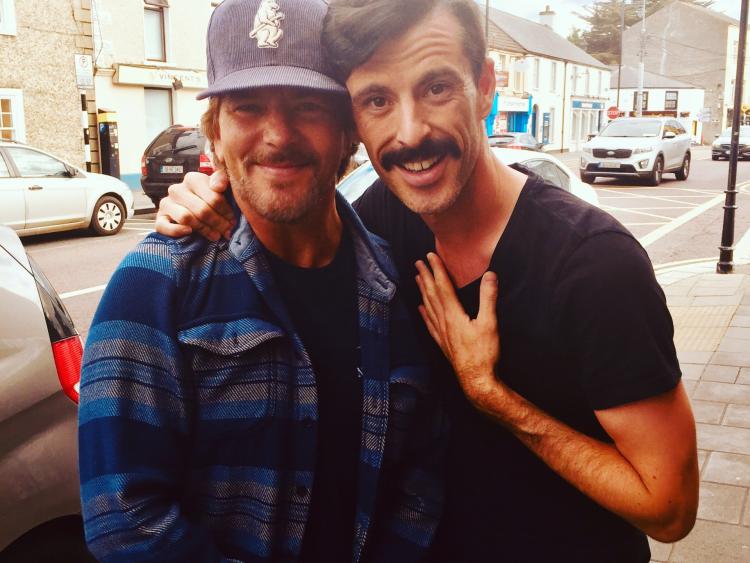 A Leixlip man had the shock of his life when he met one of his heroes wandering around Celbridge.
Brian Keville was driving with his partner down the street in Celbridge on Tuesday, July 2, when he spotted two men who looked familiar.
One of them, he quickly noticed, was Irish music legend Glen Hansard, but the other, he realised with a shock, was Eddie Vedder, the lead singer of seminal 1990s American rock band Pearl Jam. “I almost crashed the car into a bush,” Mr Keville admits.
He pulled over the car and ran back up to the two men.
“You’re my hero,” he told Chicago native Vedder.
“I turned into a little boy again,” he admitted.
Mr Keville has an impressive moustache and when the rock legend questioned him about it, he told him that he is the lead singer in a Queen tribute band, called Qween. 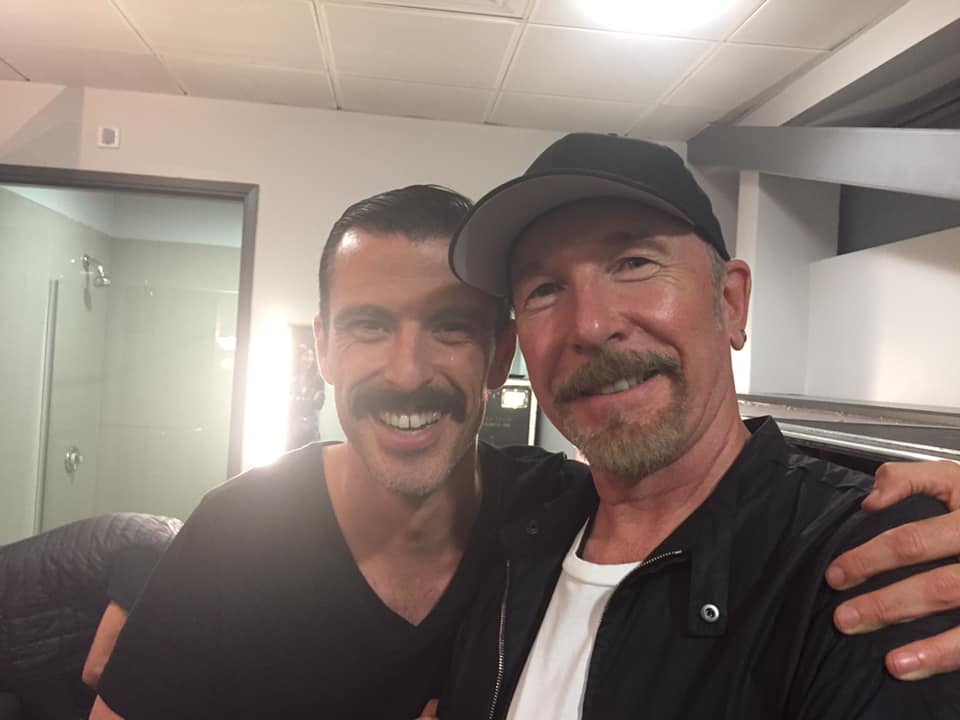 Naturally, Vedder asked Mr Keville to give him an example of his finest ‘Freddie’.
“I sang the ‘Deo’ line and I nearly knocked him off his feet.”
He said that Mr Vedder was amazing. “He was so lovely. He left a message on my brother’s phone and he gave me some guitar plectrums.”
But that’s not where the story ends. In fact, it was just about to get a lot crazier.
The following night, Mr Keville was sitting at home watching a stream of Pearl Jam’s concert in the 3 Arena on Facebook when the lead singer paused the concert to tell the crowd about a Freddie Mercury impersonator he had met the day before in Celbridge. He then put a huge, 20-foot high, visual of Mr Keville, dressed in Freddie Mercury garb, on the screen behind him.
“I started getting messages on social media from people telling me that Eddie Vedder is talking about me,” said Mr Keville. “I dropped everything and drove down to 3 Arena. I parked the car and was running through the crowds saying ‘I’m Freddy, I’m Freddy!’

Eventually, security sent him in the direction of backstage, where he was met by Glen Hansard.
“Brian, you made it!” the Irish singer greeted him.
Hansard left him, saying he would organise access and be back in two minutes.
He came back and brought Mr Keville in where he met Vedder and his wife Jill, who at this stage was following Qween on Instagram.
They got him to do ‘Deo’ again in the dressing room.
“Eddie said: ‘I got you a gift — a Zippo lighter,” said Mr Keville. And he told him that only he and the Edge from U2 have that gift.
“I turned around there’s the Edge. It was surreal!”
Then Mr Keville showed Vedder how to do the Freddie Mercury stance.
The Pearl Jam front man’s wife called her daughter Harper, who is a major Queen fan. “And she’s getting all shy and starstruck by me!” 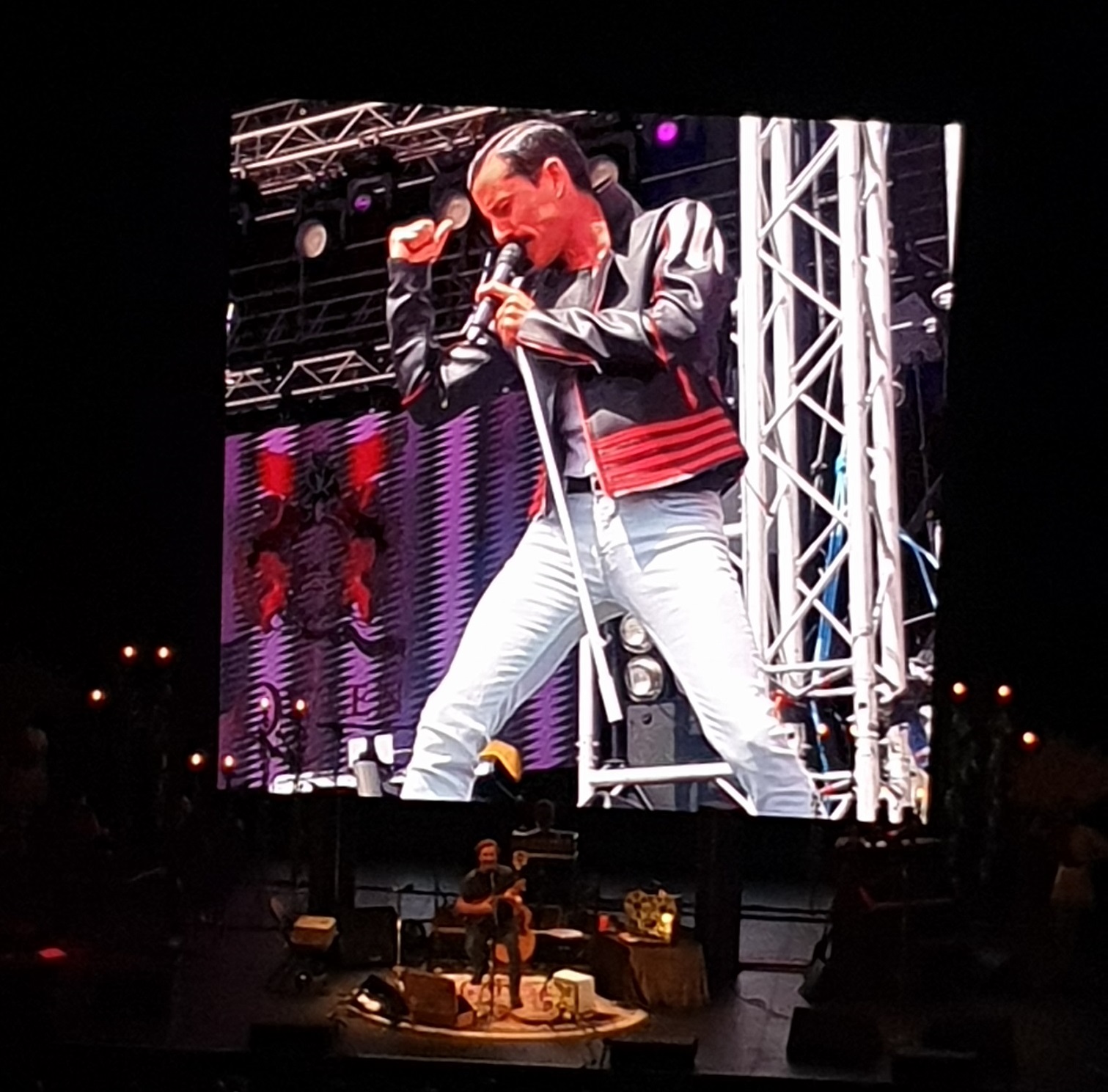 The picture of Brian, as Freddie Mercury, on the back screen at the Pearl Jam concert

“And then I got pictures with Jill, Glen Hansard, the Edge and Eddie. He’s just a really super polite man.
“They’re all such lovely, warm people. There was no ego in that room. They were just having a laugh.”
Vedder told Mr Keville that the following day he was heading to the UK to play with Pete Townsend of The Who.
“You’re the reason I got into the Who,” Mr Keville told the singer.
When he left, still floating on cloud nine, Mr Keville drove six miles in the wrong direction.
“I was in another world.”
But he says the moment was a deeper meaning for him. “July 4 was meant to be my mother’s birthday. She died four years ago, so maybe it was something that was meant to be.”
Since then the story has gone viral with media outlets all over the world picking it up and Qween is suddenly becoming hugely popular on social media.
“I’m getting friend requests from all over the world!” he admitted.
Reflecting on the whole episode, Mr Keville remarked “When you meet your heroes, they want to know more about you than anything.”
He described the mention from Mr Vedder on stage as “the ultimate endorsement”.