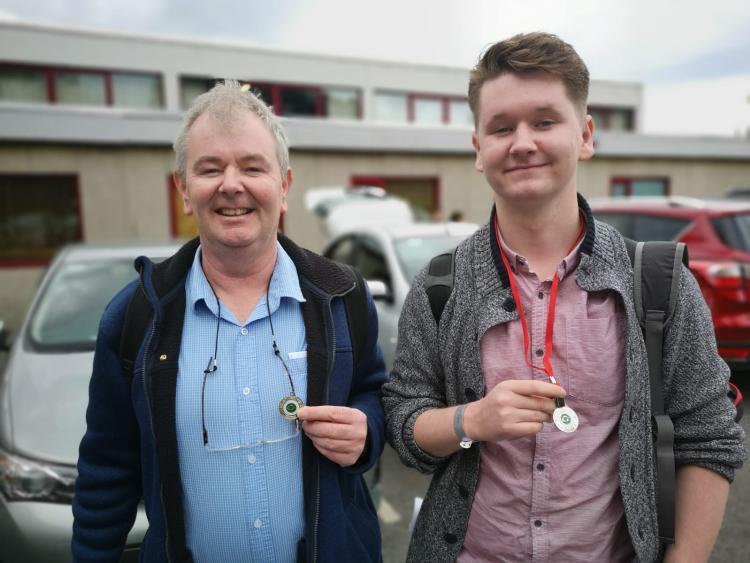 Father and son, Niall, left and Brian Crehan from Prosperous after the Kildare Fleadh.

A father and son from Prosperous competed in the Leinster Fleadh on Saturday having come first and second in their category in the Kildare Fleadh back in May.
Niall and his son Brian Crehan are from a long line of musicians dating as far back as the famine, so playing music was a sure thing in their house.
Both father and son entered the Kildare Fleadh in Naas on May 12 in the senior Fiddle — Slow Airs category. The pair came first and second which propelled them onto the Leinster Fleadh.
And while they won't progress any further Brian says they learned much from their experience at the Leinster Fleadh.
The pair were at the Willie Clancy week in Clare until late the previous night, making it difficult to practice before competing in Rathcairn in Co. Meath.
Both Brian and Niall had a similar upbringing, having been brought down to County Clare to the Willie Clancy Summer School week, year after year without fail, where they would learn their native music.
From a young age Niall would be transfixed by his uncle Junior Crehan’s playing, especially his very emotive and haunting slow airs.

From this was spawned a lifelong love affair with slow airs.
Thanks to the work of music collectors and the Irish Traditional Music Archive, Brian and his generation have access to the musical masters who have long since left us.
Recently Brian acquired some private recordings of Junior from their dear friend Alan O’Leary in London.
“If it weren’t for people like Alan and the numerous other collectors who traveled the length and breath of the country recording the old masters, my generation would never get to hear the subtle beauty that the old boys had,” Brian explained.
“It’s music that really enthrals you emotionally.
“In terms of slow air playing I’ve learnt so much from the likes of Junior, Bobby Casey and the other Clare greats.
“Hopefully what I’ve learnt off those recordings will serve me well at the Leinsters!”
Being father and son, teacher and student, and finding eight slow airs for the competition of the Kildare fleadh proved difficult due to their shared repertoire.
“There was a lot of good hearted arguments over who could have which air,” Niall explained.
“We eventually settled on our lists but there may have to be more renegotiations seeing as both of us are in the big leagues now!”
Looking back on his experience, Brian says that getting to get as far the Leinster Fleadh was “a win” for him.
It was his first competition at that level and he hopes to try and better his results in the coming years.