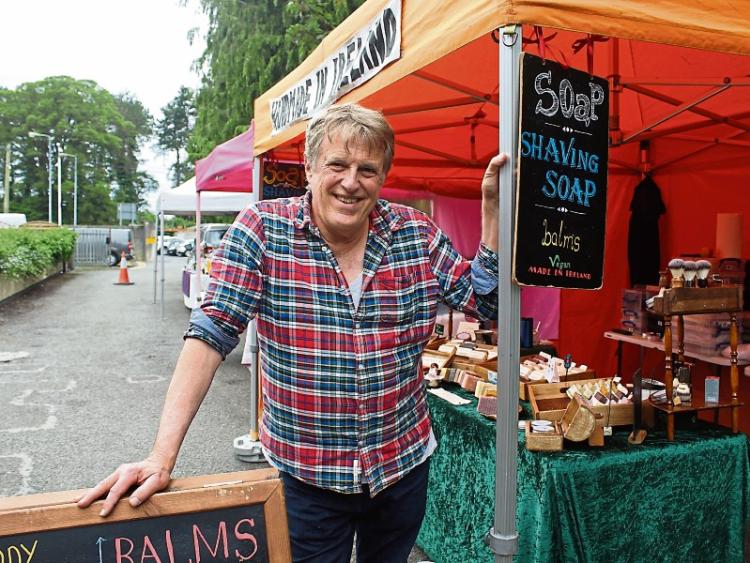 Monasterevin man John Hardt has a nose for soap, so much so that he started his own cottage industry, A Bend in the Barrow from his kitchen in 2010.

It all began as an experiment after his three children grew older and he had more time for himself. His soaps are all hand made and have a gorgeous luscious smell that is as unique as it is recognisable.

“I thought I would make a batch of soap,” he said.

“I am self taught and the fragrances all come from my own nose. I experiment and I have a nose for it. Everything I do is earth friendly and in some cases that means using a fragrance oil instead of an essential oil such as in the case of Sandalwood for example.”

John is an American who met his Irish wife Judy in the States and after they fell in love, they returned to Ireland and settled in Monasterevin to raise their children. Since 2010 his business has expanded to include not just a wide range of soaps but also massage oils, balms and beard oils. He sells mostly online or at local farmers markets.

“I don’t do wholesale to the shops,” he explained.

“I sell online to USA, UK, Australia, South Asia — all over really. It is a cottage industry and it started out as a hobby. It is a total family business with my three children, Jonathon, Siobhan and Meaghan all involved. Siobhan has done the art work and Meaghan does a lot of the social media work.

“We are never short of soap in our house. A bar of soap would last me a week in the shower but the kids could go through one in a few days. If you lather it up well and rinse off it will last you a long time,” he said.

John is a regular at Naas farmers market once a month and at the Newbridge Cottage Market which is on the first Saturday of every month.

His big aim is to help his clients move away from the use of plastics in their bathrooms in a bid to protect themselves and the environment.

“I am trying to get people to switch from the plastic soap pumps back to the bars,” he added.

“There is too much plastic packaging out there and now with the westernisation of China and South East Asia the usage of plastic is growing faster than even predicted. We are a green industry — we source all our bottles from Germany and our soap packets we make ourselves at the house in Ballagh. Plastic is killing us as it not compostable — I’m trying to do my bit and set an example for the kids.”

The name Bend in the Barrow came to John after his wife Judy, who works in the medical profession, carried out a survey among her colleagues. “Everyone liked Bend in the Barrow so that was that,” he said. “I wanted to build to a brand — something that is sellable or I could pass on to my children if they wish to take it on.”