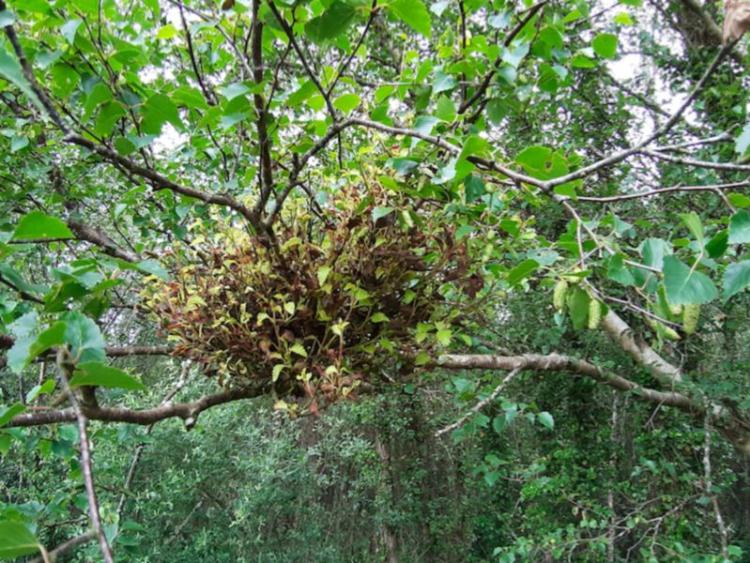 This week, while visiting Lullymore West Bog, a nature reserve of the Irish Peatland Conservation Council, something in the silver birch (beith gael as Gaeilge) trees grabbed my attention.

Looking closer again, although it was very twiggy in nature, I realised this definitely was not a birds nest as there were leaves growing from it.

My next thought was it must be mistletoe. Mistletoe has long been associated with Christmas, and it is a parasitic flowering plant that, to survive, must find a host tree or shrub to attach to.

Continuing to look at this unusual species, I then noticed that the edges of the leaves were serrated, and not smooth like those of mistletoe.

I realised the leaves were actually the leaves of the silver birch tree. Through the process of elimination, I soon realised it was witches broom (Scuab Chaillí as Gaeilge). This is something that is very common on trees but, just as I did, can be mistaken for an old birds nest or indeed mistletoe.

Witches broom can be found on a variety of tree species and is said to be caused by fungal, bacterial, viral or in some cases insect activity on trees.

Scientists have identifed that it is a fungus called taphrina betulina, that causes the development of witches broom on birch trees.

It is thought that witches broom has no immediate damaging effects on their host species, but over time can stunt their growth.

Although observed easiest in the late autumn and winter, when the trees have shed their leaves, have a look this week in your community and see can you find witches broom growing on a tree near you.