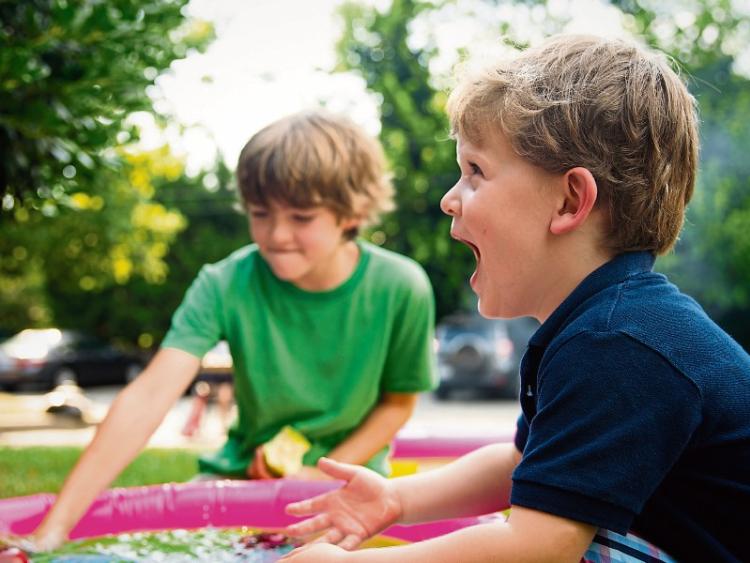 My six-year-old is allergic to playing alone

I really want another child. Not a newborn though. One that small would be no good to me anyway.

I preferably need a male one, he should be aged between six and eight and he must like football and being rough. If that happens to describe your child, can you send him my way for the summer? I promise he will be treated well!

You’re all probably wondering what the hell I’m going on about now! Let me explain. So Aidan was off school last week on a mid-term break. Sarah had playschool on Wednesday, Thursday and Friday and even though she was home at noon each of those days, her brother, and indeed herself for the most part, have no interest in playing together. They do try, mind you, but it just ends in a row.

There’s only a year and a half between Aidan and Sarah in age and most of the time they are anything but great friends. They drive each other round the bend.

She won’t play what he wants to and vice versa, and from there it’s a case of listening to them moan about being bored.

Sarah, to be fair, is quite happy to play by herself. She will often disappear in to her room for ages and play with her dolls, teddies or anything else that takes her fancy.

Aidan, on the other hand, is allergic to playing alone. I’m always suggesting he play with his Lego or jigsaws, but the response is always a negative one. All he wants to be doing is playing football outside and his sister is never up for it. Sarah likes football, but not half as much as Aidan does so she can take it or leave it. Plus, she’s not at the same level as Aidan, which drives him and her mad.

To make matters worse, it was raining in the early half of the mid-term break, so being housebound made Aidan even more frustrated than usual.

On Thursday he was finally satisfied. I asked his best friend and cousin over for a play date. They are as thick as thieves and they are both football mad. Thank God the rain stayed away for the most part, and the two lads were as happy as pigs in the proverbial outside kicking ball. This mammy was also happy I can tell you!

So this is why I want to borrow a male child for the summer! I’m not sure I’ll get through the holidays without one! Would it be odd if I organised play dates every single day of the summer holidays? At this point I am strongly considering it!

It’s either that or we get Sarah up to speed with her football skills so she can play with him from morning to night!

On Thursday my neighbour, who has three boys, one of whom is only a few months old, asked Aidan up to play football with her older two. I told her he couldn’t go because his cousin was over to play. That didn’t bother her — the invitation stood to the cousin as well.

Initially I thought she was mad wanting to add Aidan and the cousin into the mix especially seeing as she has a baby too.

Then, however, I realised the method in her madness! Like me, she knows that the more like-minded kids she has together, the easier it is for her. So off they went and she insisted that I head off home for some peace.

We both had peace. Her boys were outside and happy to play with Aidan and the cousin, while I got to go home and get a dinner on. Praise the Lord for like-minded kids and for neighbours!

Praise the Lord too for summer camps, namely GAA summer camps! They are the best yokes ever for kids like Aidan. They should be run during every school break! I’d even consider putting one on in my own garden this summer!

The night Sarah was born I was so over the moon when I found out she was a girl. I had my gentleman’s family, my boy and my girl, and that was all I wanted. It’s great but let’s be honest here, it may have been easier if Sarah was a boy! Or maybe she just needs to have intensive football coaching so she can just go out and play with Aidan without either of them flipping the lid!

Or maybe he needs to just learn to compromise and sometimes play what she wants to play from time to time! Although that’s not likely any time soon judging by his stubborn attitude.

So, if you’re the parent of a six to eight year old boy who loves football and are dreading the summer holidays then please send him my way. He will be well fed, get plenty of exercise and will do my head good!