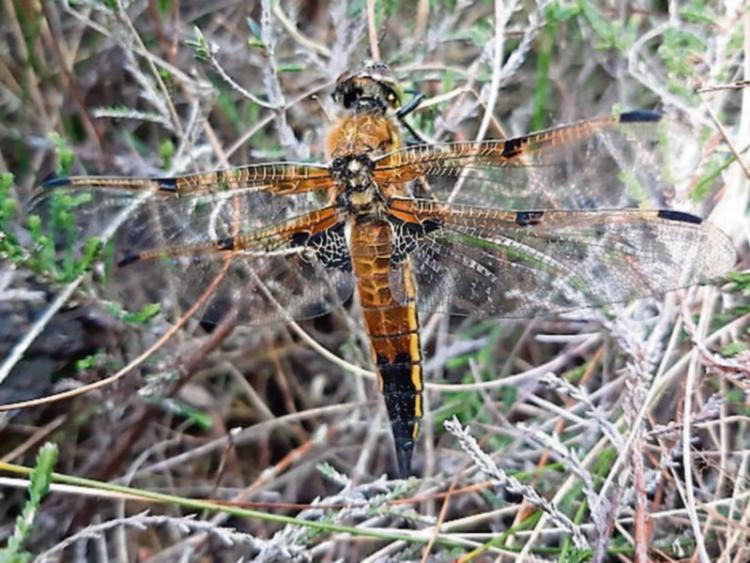 As an environmental education officer, I spend much of my working days at this time of year with groups of students who are exploring peatland habitats.

I am always amazed with the variety of wildlife that I encounter with a group of young enthusiastic students.

One recent group came across the viviparous lizard; Ireland’s largest spider, called the raft spider; the common frog and this week’s species, the four-spotted chaser dragonfly (ruagaire ceathairbhallach as Gaeilge) — all in a the space of 30 minutes.

This large dragonfly has an 8cm wingspan. It is easily identified with four dark spots on its wings, its gold-brown body and large compound eyes attached to a head that can move in all directions, including behind, in search of prey. Like all dragonfly species, the four-spotted chaser lays its eggs in water, often preferring to lay them on floating leaves. Once the nymphal stage hatches, they spend two to three years developing underwater.

The young feed on a variety of freshwater invertebrates including tadpoles while their bodies are protected in a hard exoskeleton, which they must shed each time they grow.

Each time they shed their exoskeleton, these fierce carnivores are most vulnerable to predation themselves.

Once ready to emerge onto land, the nymphs crawl from the water using the stems of water-dwelling plants including common reeds and yellow flag iris.

They shed, for the final time, their hard exoskeleton and wait to dry in the summer heat before spreading their wings and becoming the darting dragonflies we are familiar with at this time of year.

As carnivores, the adults are territorial and have the ability to catch and eat their prey, such as mosquitoes and midges, in flight.

The four-spotted chaser can be seen from mid-May to September so take a walk along the banks of a local river or canal or visit your local bog and you may be fortunate to come across it this week yourself.