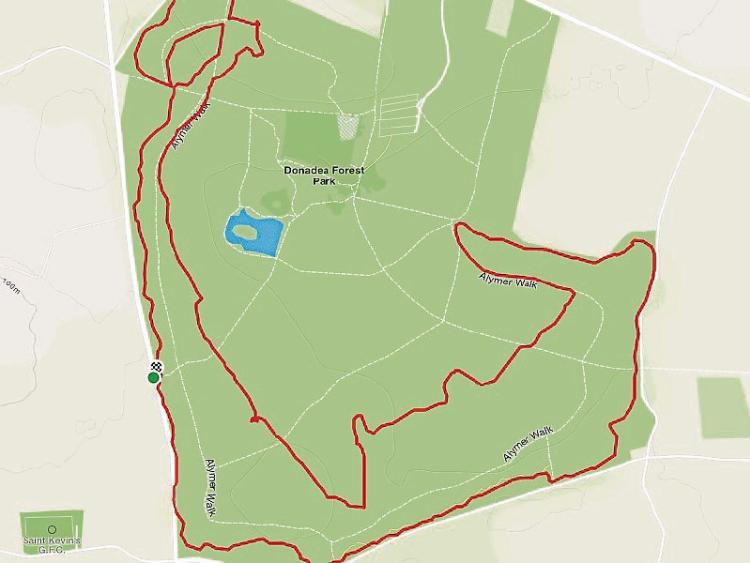 The text message went out at 12.37 last Wednesday. “Are we on for tonight?”

A suspicion formed that I wasn’t the only one having one of those days in work.

I was supposed to be writing this column, but then I was also supposed to be coming up with ‘a line or two’ about 90 candidates for an election that will be over by the time you read this.

7.03pm: we all arrive at the side door of Donadea Forest Park. I pull up and unload the bike out of the back of the car.

Five minutes later we’re all ready to rock, but first the chats.

“Oh grand, I got that finished alright. Grouted and all.”

The first section, inside the door to the right, through gnarly pine trees, is tough. It’s full of short, sharp and uneven bumps that need to be negotiated — best to do so by building up some speed and staying out of the saddle.

It’s called 'Amazon' on Strava for some reason.

I fall. Scrape the back of my leg. No big deal, really.

None of us really feeling it in the legs. They've spent far too long under a desk for our own good.

Finally we get out of the ‘Amazon’ and head across a faster spot called 'Boardwalk to Limetree'.

Local mountain biker Brian Cribben started building this route years ago and it’s now so good that even walkers in the park have copped on that it’s a far more interesting and varied walk than the main paths.

Anyway the legs have started to come good, the breathing is starting to even out and the heart rate is happy enough at about 143-ish.

Except on the hill. It requires concentration to avoid all the roots and branches, and the nettles and briars, because we’re in shorts.

It’s not so bad when it’s dry, but when it’s mucky and slick it’s as much down to luck as it is fitness and skill to get up it.

One of the lads fell on Wednesday night. Front wheel caught the down side of a root and he was on his backside before he knew it.

That’s the worst of it really. After that it’s fast and flowing all leading up to a great swooping descent called the DH section on Strava.

Oh, and there's a large bomb hole where you could spend forever just flying down and back up, over and over, just for a brief moment in time, feeling like a nine year old again.

Getting to the bottom of the big hill, one of the lads says his missus has asked him if he’s having an affair because he seems to like disappearing on Wednesday evenings for a few hours, and coming home all sweaty.

“Sure this is way more fun that an affair,” he says, and we all laugh because it's true.

The previous Tuesday morning I went to Celbridge to see Liam Cannon head off on his birthday cycle with members of his family and his fellow ‘Plonquers’ on an 80kms cycle, one kilometre for every year.

He did eight editions of the Rás including riding on the same Kildare team as Paddy Flanagan.

His entire life is dedicated to cycling. His kids cycle and his wife cycles. He still does 200kms a week and he enjoys the banter and the craic with the lads on the road.

Les Plonquers are a bunch of fun loving fit retirees who are living the life every 40-something mired in a so-called-career hopes they will get to enjoyin 20-something years.

I was interested to note that they seemed to have very nice bikes — something else to look forward to in retirement!

Liam could pass for a very fit 60 year old. He is the living, walking, cycling undeniable proof that riding your bike keeps you as young as your heart tells you.

In the constrained world of responsibilities, of living on beans to pay the mortgage, of trying to understand pension statements and IKEA instructions, there are working lunch tummy bulges, creases and crows feet, and grey hairs covering bald patches.

But out here, brushing past the briars deep in the Donadea forest, everyday concerns and stress fade into the background, falling like dollops of sweat from our brows.

The years roll back, the grey hairs of the mind recede and the heavy legs are light and full of fire again.