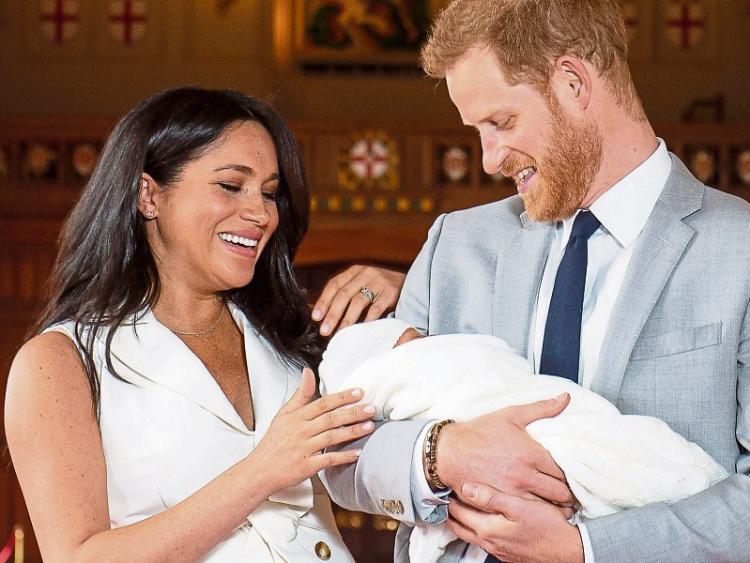 How are the royal couple coping with the new arrival

I’m going to throw some cliches out now — it’s the toughest job in the world but the most rewarding; soak it up because they aren’t small for long etc! I’m sure the Duke and Duchess of Sussex are loving their new role as parents.

But, come here, did you see Mehgan showing baby Archie off to the press a couple of days after he was born? She’s a brave woman I can tell you. A white dress a few days after giving birth; she’s a risk taker alright!

Was she not just petrified of a leak because, at the end of the day, not even a duchess has control over that?!

For those of you not in the know, after giving birth and for a good few weeks after, a woman bleeds. And bleeds and then bleeds some more!

Maternity pads are both essential and hideous. They are gigantic and call for granny knickers of epic proportions in order for them to stay in place.

So I can only presume the duchess was sporting a pair underneath the fabulous white frock. She’s brave alright. Very brave.

The whole thing got me thinking of the days and weeks after I became a mammy for the very first time, and I wonder is Meghan feeling and experiencing the same.

Did she get the baby blues three days after the birth and lose the rag with Camilla like I did with my mother-in-law? Poor old Camilla, like my MIL did, probably came in to lend a hand.

She probably washed the bed sheets because Meghan had a few leaks or took over in the kitchen to give the new parents a break.

It probably all got too much for the duchess, though, and she flipped the lid and asked Camila to f*ck off so she and Harry could just be in their own wee bubble with the new baby.

I bet she did; flipping the lid is par for the course a few days after having a baby!

I wonder did all the family pile in on top of her for a visit a couple of days after Archie’s arrival? Were William, Kate and the three sprogs on the doorstep looking to meet the new baba?

I bet young Charlotte couldn’t resist poking Archie as he slept in his moses basket and as Meghan smiled through gritted teeth.

Did Prince George insist on holding his young cousin? Did Meghan and Harry reluctantly agree as the four year old treated their precious bundle like a ragdoll?

Did William and Kate outstay their welcome? Was one cup of tea and a chocolate digestive not enough? Would they ever just eff-off, I bet that’s what they were thinking!

Afterall Meghan, despite it being the afternoon, probably still hadn’t managed to get dressed, let alone have a shower and she was probably paranoid there was a bang off her due to the maternity pads!

When they are alone I wonder does she send the hired help out to Tesco to pick up a cabbage because her tits are just killing her? Like me, she probably read online that putting cabbage leaves in the freezer and then putting them inside your bra gives you great relief.

In fairness her nipples are probably as good as chewed off because little Archie is struggling to latch on properly.

Does the public health nurse call round to a duchess? If one does, does he or she tell Meghan to lay off the Tylex she has been prescribed for the tear down below?!

The Duchess is probably a bit giddy from all the codeine and the nurse is worried she’ll develop an addiction. Harry has probably helped himself to some to help him get through the day due to the lack of sleep and he’s most likely disgusted the wife won’t be prescribed any more of them!

Was Meghan gagging for a glass of wine as soon as Archie was out? Nine months of no drink would do anyone’s head in, especially if she had to listen to a drunk husband during that time.

Maybe the hired help picked her up a bottle of Blossom Hill when they were out getting the cabbage!

Did she get a Bugaboo or an Uppababy Vista, I wonder? I bet the sister-in-law Kate, like mine did, gave her the car seat because, lets face it, her lot have grown out of the infant one anyway.

She probably loaned her the isofix base as well, and a whole host of other baby-related stuff. Like her Medela Swing breast pump and her microwave steriliser. Waste not, want not!

A woman is a woman is a woman when it comes to giving birth. Unlike Meghan I faced my public (health nurse) in my pajamas and not a pristine white guna but we both had an adult nappy on us all the same!