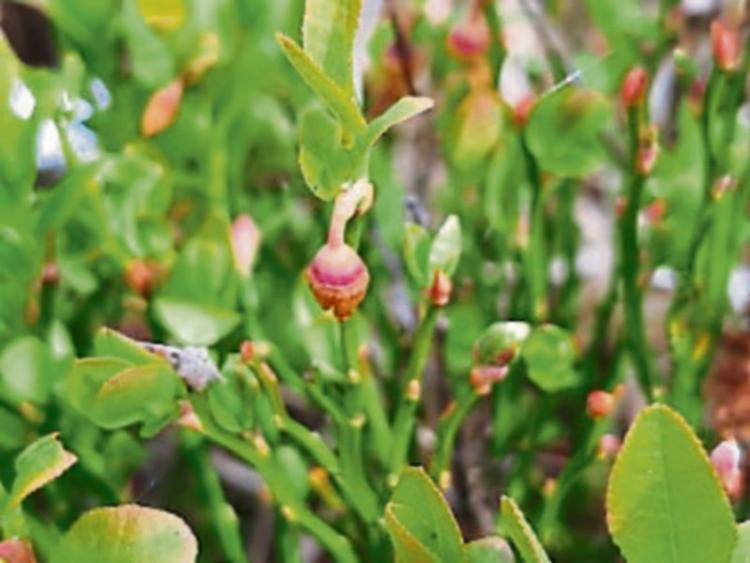 Find and look at a Horse Chestnut tree in your area this week and see if you see the similarity.

Last week myself and my colleague completed the quarterly water level monitoring on Lodge Bog. Although we encountered a variety of bogland wildlife one species that is in flower at the moment is Bilberry (Fraochán as Gaeilge).

Bilberry is a native plant in Ireland, belonging to the European blueberry family and is found growing on acidic soils such as boglands and woodlands throughout Europe.

The taste of the berries can also help distinguish between them as the European bilberry has a rather bitter taste when compared to the sweeter North American blueberry.

Visually, bilberry grow their berries either singly or in pairs while the North American blueberry grows berries in clusters.

Bilberry is a shrub that can grow up to 60cm in height, the leaves are deciduous and pale green with a gentle, toothed edge. The North American blueberry is evergreen in comparison. The drooping flowers of the Bilberry are green-pink in colour and take the shape of a lantern.

The dark purple berries of the bilberry were once used to make a dye — however they were also an important food source. Something I did not know was that traditionally bilberries were picked on the last Sunday in July which was given the name ‘Fraochán Sunday’.

Unfortunately we won’t get to taste and enjoy any bilberries until later this summer but it does give us an opportunity to look up some recipes to make jam, tarts or muffins with the bilberries once collected.