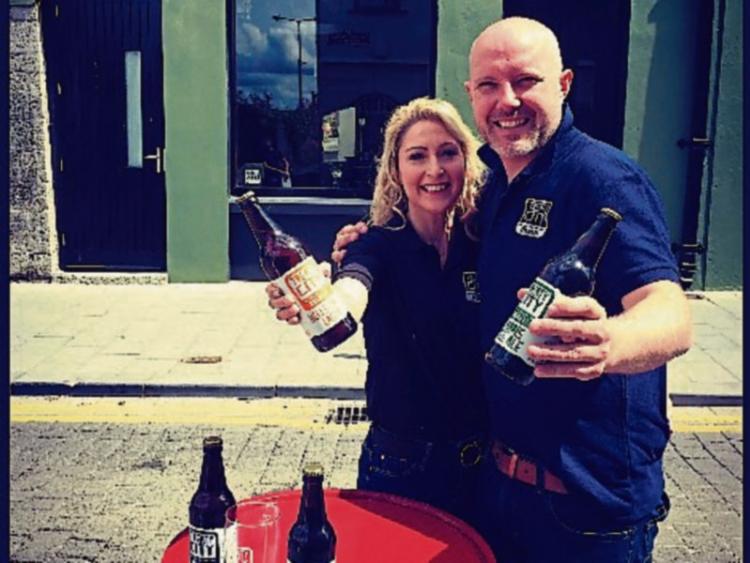 Stephen and Treasa from Treaty City Brewing in Limerick

Stephen Cunneen, a manufacturing engineer by trade, started home brewing in his apartment in Vancouver, Canada.

After the birth of his first child and six years in Canada, Stephen and his wife Treasa decided to move home to Limerick to be close to family and friends.

Limerick has a strong brewing history — breweries were the most registered business in the city between 1710 and 1740.

Proud of the brewing history in the city and on the cusp of the craft brewing movement in Ireland, Stephen set aside his engineering career and turned to his passion into a career. He started to contract brew and sell his beers made from the recipes he used in Vancouver. This was the birth of Treaty City Brewing.

In 2016, Stephen decided it was time to build a more permeant home for his business.

Over a six-month period in a premise on Childers Road in Limerick, Stephen and his father built the brewery mostly by themselves.

It had the capacity to brew 3,000l batches so Stephen started to take over the taps in Limerick city with his three core beers:

l Harris Ale: a big, bold hop-forward Pale Ale with a malty backbone which makes it easy to drink.

l Shannon River IPA: This is a balanced, hop-forward IPA with pine and grapefruit notes and a malt backbone to balance the hop aroma.

After a further three years of growing the business and building the brand of the brewery, Stephen and Treaty City Brewery has now embarked on its newest adventure, a brand-new sparkling brewery and visitor centre in centre Limerick city.

The building that the brewery and visitors centre is in is a 250-year-old building located in Limerick city’s Medieval Quarter.

The tours that started on May 24 offer a unique and authentic experience that pays homage to the art of brewing .

The tour includes a walk through the newly-commissioned brewery, a talk from the head brewer Gabriel and a beer tasting of the core range at the end.

The opening of this dedicated visitors experience is a great addition to the craft brewing industry in Ireland.

Don’t forget to go and visit if you are west of the Shannon over the summer.