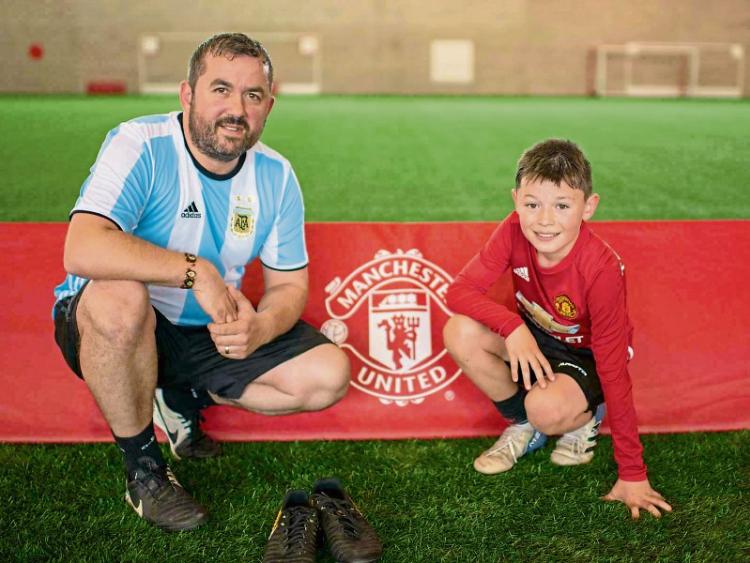 A Kildare schoolboy had the world at his feet earlier this month during a once in a lifetime experience at the Theatre of Dreams.

Logan Tennyson, from Coill Dubh, was one of a lucky group of children to visit Old Trafford.

The nine-year-old, who has been kicking a ball since he could walk, was told he had been selected to take part in their training academy just the week before.

His father Gary, had entered him through a social media competition, run by sponsors Tag Heuer.

The company invited people to send in their videos showcasing their children’s footballing skills.

Logan’s talent clearly impressed the selection panel and he was invited along to the academy with children from all over the United Kingdom and Ireland.

The schoolboy said it was a “dream come true” to visit the stadium where his heroes play.

“I love football and I love Manchester United. When my dad told me I had been picked to go I was so excited,” Logan explained, “I have loved every second of it and I can’t wait to come back again to watch a game.”

Logan, who shares his birthday with the late, great George Best, has followed in the footsteps of his dad Gary as an avid supporter of the Red Devils. Reflecting on the experience on May 2 at Old Trafford, Gary said it was “incredible” for both Logan and himself.

“The whole day was fantastic, the set up was so professional and Logan thoroughly enjoyed it.

“To be able to share the day with him is something I will never forget. He will take away great memories from this and that’s the most important thing.”

To mark the occasion, Logan was gifted a Manchester United shirt which will no doubt have pride of place in his home.

Logan currently plays football for Kynog United and Gaelic for St Kevin’s in Coill Dubh. But who knows, in a few years he might just be running onto the pitch at Old Trafford, fulfilling the biggest dream of all.