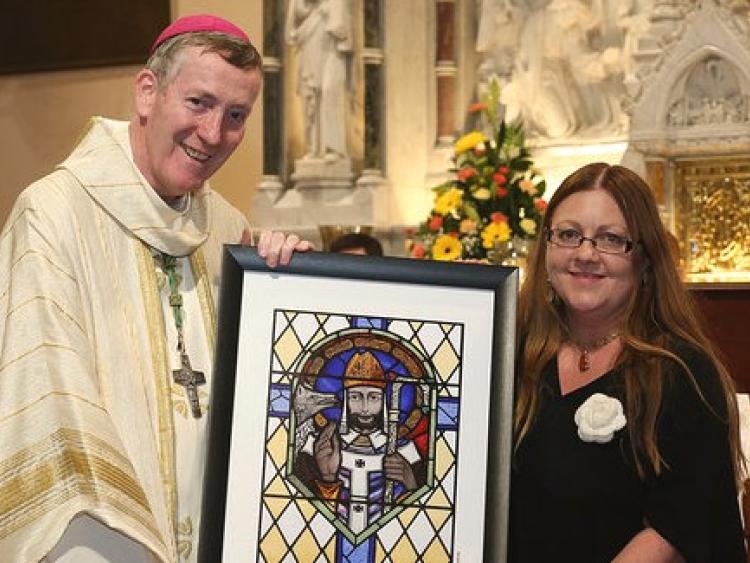 Saint Conleth died on 4 May 519 and 1500 year’s later, the people of the parish of Newbridge came together on his feast day of May 4 to mark the anniversary of his death and to celebrate the vibrant parish life that exists in Newbridge some 1500 years after this death.

The weekend of celebrations began with Mass on Saturday 4 May in Saint Conleth’s Parish Church, Newbridge. Bishop Denis Nulty, Bishop of Kildare and Leighlin was the principal celebrant. The Mass, which was concelebrated by priests and religious from the parish and from the diocese, was attended by more than 700 people with many of the ministries and services of the parish represented in the opening procession and throughout the Mass. Local school students and staff were also involved as well as the young people preparing for First Holy Communion in the parish.

One of the highlights of the Mass was the reading of a special papal message from Pope Francis which was received for the St Conleth 1500 celebrations.

The message from Pope Francis, which was signed by Cardinal Pietro Parolin, Secretary of State, said: "His Holiness Pope Francis was pleased to learn of the celebration marking the fifteen-hundredth anniversary of the death of Saint Conleth, patron and first Bishop of Kildare, and he sends prayerful greetings to the you and to the priests, consecrated men and women and lay faithful of the diocese. Joining you in giving thanks to almighty god  for the example of this saintly bishop and abbot, his Holiness encourages all of you to remain rooted in fidelity to the Lord.

"In this way, as you seek to proclaim the gospel by following Christ in missionary discipleship, each parish will be strengthened as a place where all can encounter “a community of communities, a sanctuary where the thirsty come to drink in the midst of their journey, and a centre of constant missionary outreach” (Evangelii Gaudium, 28). Entrusting the people of Kildare and Leighlin to the intercession of Saints Conleth, Brigid and Laserian, the Holy Father cordially imparts his Apostolic Blessing as a pledge of strength and peace in the Lord.

In his homily for the Mass Bishop Nulty said: “The important message is the life Conleth led and the legacy he left behind, a legacy we live out of and celebrate this night. In his very first Chrism Mass homily Pope Francis used an image that he has returned to again and again and again. I give the exact quote: 'the priest who seldom goes out of himself … misses out on the best of our people, on what can stir the depths of his priestly heart … this is precisely the reason why some priests grow dissatisfied, lose heart and become in a sense collectors of antiquities or novelties, instead of being shepherds living with the ‘smell of the sheep’. This is what I am asking you – be shepherds with the smell of sheep”.

Bishop Nulty went on to say, “Conleth has given a root to your faith, your Christian identity in these parts. Pope Francis in Christus Vivit reminds us “roots are not anchors chaining to past times and preventing us from facing the present and creating something new. Instead, they are a fixed point from which we can grow and meet new challenges … we are sent today to proclaim the Good News of Jesus in a new age. We need to love this time with all its opportunities and risks, its joys and sorrows, its riches and its limits, its successes and failures”.

At the end of the Mass Bishop Nulty was presented with an image of a piece of the stained glass from St Conleth’s parish church which depicts Saint Conleth.

This pilgrimage was revived this year for the St Conleth 1500 celebrations and more than 80 people took part in the pilgrim walk to what is now an  historic graveyard where a short prayer service and blessing of the graves took place. Local historian Paul Cooke gave an overview of the stories of some of those who are buried in the graveyard which is now sited in a modern stud farm.

The weekend of celebrations concludes on Monday night when the parish Novena will see the Papal Nuncio to Ireland, Archbishop Jude Thaddeus Okolo as principal celebrant and homilist for the second night of the annual novena.