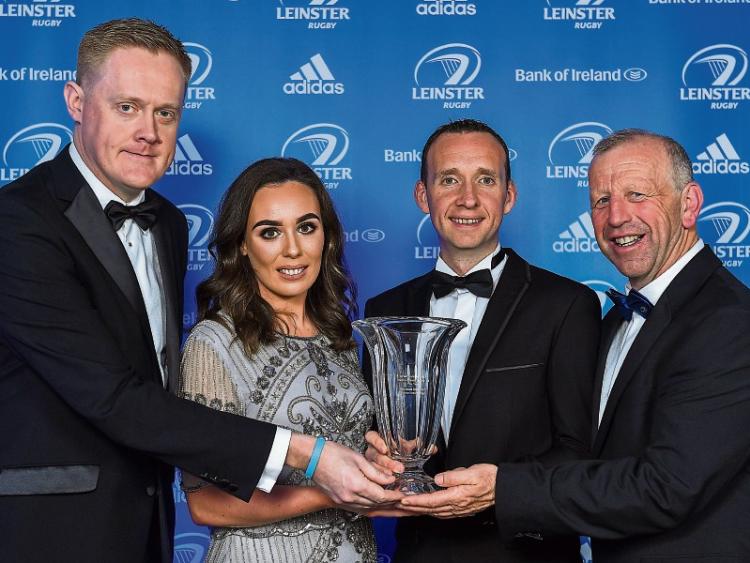 Andrew Burke and Ailleen Langton of Patrician Secondary School, are presented with the Irish Independent Development School of the Year award by Fionnán Sheehan and Lorcan Balfe

The Patrician Secondary School, Newbridge, has been awarded for the magnificent schools rugby they have enjoyed in 2019.

The school captured the Pat Rossiter Cup (Junior) and the Anne McInerney Cup (Senior) last March, a great achievement by any standards.

At the Leinster Rugby Awards Ball on Sunday, April 28, in the Inter Continental Hotel, Dublin, the school was awarded the Irish Independent Development School Award.

In schools rugby parlance, Patrician Newbridge may have some way to go to catch up with their famed neighbours, Newbridge College, but on this year’s achievements they are making some inroads.

In existence since 1960, the school would have a strong sporting history competing in the A grade in GAA, soccer, basketball and athletics. Kildare stars Johnny Doyle and Dermot Earley, League of Ireland players Gary Shaw and Philly Gorman, basketball international Paul Cummins, and track athletes, twins Kevin and Andrew Walker are past pupils.

Rugby, while prevalent in the town, only started to appear in the school around 2011, when a number of students showed an interest in entering competition. In 2012, a meeting was organised between principal at the time, Pat O’Leary, Mick McCoy (Newbridge RFC) and teacher/coach Andrew Burke.

A decision was made to form a Junior (U16) team. No competition would be entered, but instead there would be focus on skill development. 2013-2014 saw the formation of a Junior and Senior (U19) team and they entered Division 3 Development Shield competitions. The teams comprised of players from Newbridge, Cill Dara, Naas and Clane Rugby clubs, with major assistance throughout the campaign from the Rosetown officials. The work of the previous year came to fruition as the Burke-led side won the Senior title, defeating Dunlavin CC, 24-11 in Cill Dara RFC.

The arrival of Aoife Courtney as PE teacher, especially with her rugby playing/coaching experience was to further bolster the work of Andrew Burke in the 2015-2016 season. This saw the Junior Development Shield annexed in a 24-19 victory over Coláiste Bhríde, Carnew. While the following year saw a lull on the silverware front, a major decision was made to step up to Development Cup level.

Athy RFC player Aileen Langton and CCRO Neil Taylor were invaluable additions to the coaching team for the 2017-2018 season. Both the Junior and Senior teams qualified for their respective finals. The Seniors ultimately fell to St Mel’s Longford 20-12 in the end. However, the younger crew played their part in one of the most pulsating games on the Donnybrook pitch in 2018. Trailing 26-7 at half-time against Ballymakenny College, Drogheda, they turned it around in the second half to secure the Pat Rossiter Cup 36-31.