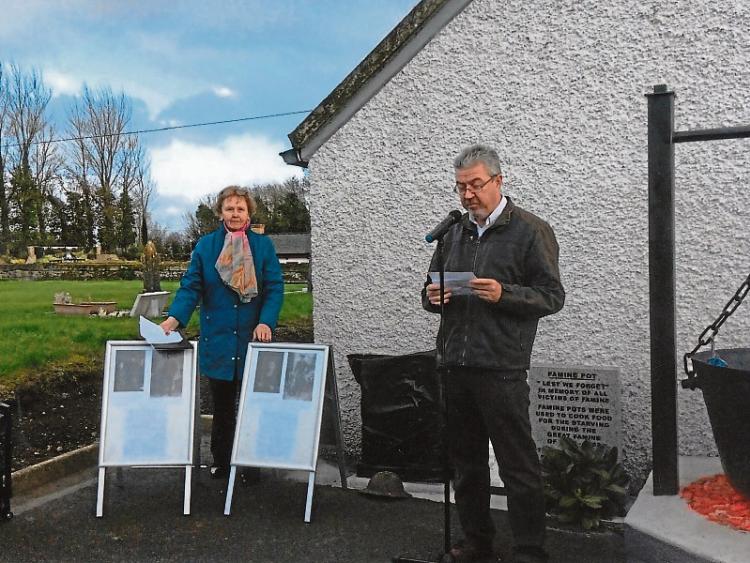 James Durney and Betty O'Shea at the ceremony earlier this year

A large cooking pot dating back to the famine era was recently unveiled in Milltown, Newbridge by historian Mario Corrigan.

The pot was discovered by builder Paddy Carroll of Dunmurray Road, Kildare, who donated it for display in the grounds of St Brigid’s Cemetery, Milltown, due to the appeal of local woman Betty O’Shea.

Mr Carroll, an avid collector of old artefacts, came across the pot while working on a local farm in Dunmurray. The pot lay idle in his garden for many years, and was originally a rust orange colour.

It was only after some later research that he realised it was a famine pot, and decided to create a purpose-built stand with chains to suspend the pot, “as they would have done in the bygone days.”

“I am delighted to donate this pot to the Heritage Centre in Milltown, in memory of the Carroll family, Milltown who experienced eviction from The Newington Estate in Christianstown,” he said.

The pot, which measures 24 inches deep and 40 inches wide, dates back to 1847, when famine pots were first introduced to Ireland.

Famine pots, also known as soup pots or workhouse pots were supplied by the British Government and the Society of Friends (otherwise known as the Quakers) at the height of the Great Famine in 1847. They were made of cast iron, and were used to provide soup to those in need, both in the workhouses and the new soup kitchens set up under the Soup Act of January 1847.

In October that year, the government ordered the closure of all its soup kitchens, as it deemed the autumn potato harvest would be enough to feed the population, although many people continued to die of starvation after 1847.

Betty O’Shea, a member of the Milltown Tidy Towns group and Milltown Heritage Centre said she was “thrilled to have the pot in our village”.

“It coincides with a find last year of an ancient axe head which was handed over to the National Museum of Ireland,” she added. Speaking at the unveiling ceremony at St Brigid’s Church on February 17, Mario Corrigan said the pot was a “fitting memorial to remember not just those who died but those who lived as well”.

“The accepted narrative of the famine in Co. Kildare is that the worst of it passed us by. By the end of the famine, however, Kildare was severely affected and the existing workhouses in Athy, Celbridge and Naas were under strain” he said.

“One million died and two million emigrated and yet this humble pot and others like it gave life to those who had nothing else”.

The Milltown Heritage Centre is open from 9am to 5pm each day and the famine pot can be seen in the graveyard.