KILDARE PARENTING COLUMN: Kindness is the one trait I want to pass on to my children 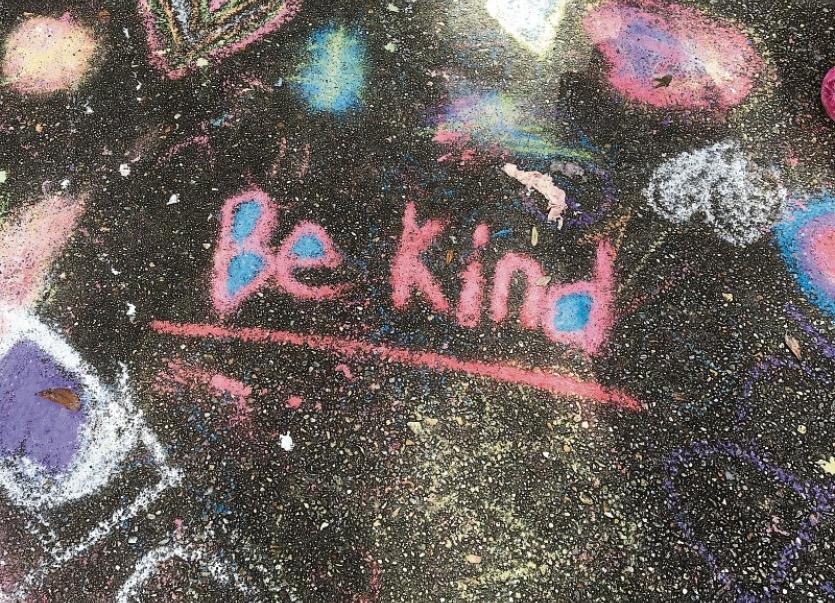 Being kind is an admirable trait that should be fostered

As I child I’m sure this is something my parents drilled into me too. I don’t ever remember it being drilled in to me but I presume they did. However, I didn’t always follow their instructions, unfortunately.

I was guilty of not being too kind to people in school and I certainly tried to exclude people. This carried on into my teenage years and indeed into adulthood, too. With the value of hindsight, it’s a deep regret.

I too was a victim of unkindness from some of my peers, and indeed some adults in my life when I was a child. It made me feel awful and really affected my confidence.

And it’s because of those feelings that being kind is probably the single most important thing I can teach my children, in my opinion.

I don’t ever want Aidan and Sarah to think they are better or above anyone else because they aren’t. I want them to treat people like they would like to be treated. I don’t want them to make anyone feel small, to feel bad or to feel worthless.

At home my pair fight like cats and dogs. Aidan loves to get a reaction out of Sarah. Nine times out of ten she obliges too. This drives me round the twist.

However, Daddy Chambers tells me this is what siblings do to each other. He tells me it’s par for the course and will continue to happen.

I’m an only child so the whole sibling rivalry thing was a foreign concept to me. I was constantly flipping the lid at Aidan for annoying his sister, and while I don’t let him away with it, I’ve learned that it’s quite normal for siblings to knock lumps out of each other.

When it comes to other people, though, this is something I will not accept from either of my children. I think it’s a case of so far so good with them. I think that both of them are kind little beings.

I think it’s probably more relevant to Aidan because he’s actually at ‘big school’. The school yard can be a tough and unforgiving place, even if you are a Junior Infant.

I’ve seen it myself. I’ve seen kids be mean to others even at the tender age of five or six. It’s horrible to see but I know it has been handled really well by the teacher and knocked on the head.

Call me naive, but I’m so shocked to see Junior Infants engage in such behaviour. I’m not quite sure what age I was when I decided to be not nice to people, but isn’t it strange that I felt the need to act that way?

I was never shown anything but kindness at home. I was always taught to be a nice person, yet I went in to school and did the opposite to some. It’s hard to work out why. In fact, I never worked it out.

I’m pleased to report that it’s a case of so far so good with Aidan in school. I drop Sarah to playschool for 9am every morning during term time. Aidan doesn’t start until 9.20pm, so I wait with him in the school yard. He plays away with his friends, while I wait for the teacher to come and bring them into the classroom. Normally the Junior Infants play tag or swap and obsess over their Match Attax collections.

One day recently, when a big gang from Aidan’s class were huddled together obsessing over their Match Attax, Aidan suddenly left the huddle.

He walked a couple of yards up the yard and stopped beside a classmate who happens to be shy. This particularly kid seems happy out at school, but he doesn’t seem to find mixing with his classmates as easy as it comes to Aidan, for example.

When all the other kids were gathered together look at the wee football cards, my little man noticed there was one child not included. He marched up to the child and asked him if he’d like to look at his Match Attax collection and the child, with a smile on his face, duly accepted the invitation.

Proud of my boy

I was so thrilled that my boy was kind.

I often ask Aidan and Sarah to think how they would feel if they were excluded, teased or made to feel bad by anyone in school. They both totally agree that it would be horrible, and that’s something I hope they both stop and think about if they are ever close on making someone feel like sh*it. Let them transport themselves into the other person’s shoes.