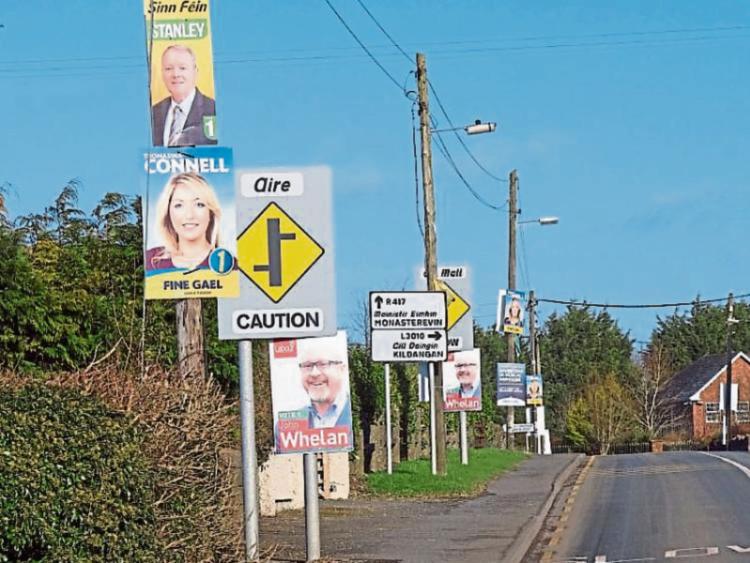 Posters during the last General Election

While the idea behind the initiative is admirable, I’m not sure how I feel about a poster free campaign.

Just over two months ago, PosterFree.ie was launched. It is a joint campaign by Séamus Maguire (Independent Donegal councillor) and David Weitbrecht from ZeroWaste.ie.

The aim was to encourage all candidates to go poster free, and the national campaign has successfully secured over 150 poster free areas.

PosterFree.ie is now calling for a national voluntary ban, marking the beginning of the end for plastic election posters.

“Tidy Town committees and local development groups have rallied behind the campaign and have been the driving force behind this environmental campaign. These groups work year round keep our villages, towns and country clean ensuring tourists keep returning to Ireland,” said the people behind the campaign.

They said in a recent Claire Byrne Live/ Amárach Research poll, 77% of respondents said that they thought the use of posters during election campaigns should be banned.

“Seven days from now, as the election campaigns kick off, it will be legal to erect election posters. Despite that, we are calling on all current and future representatives to take action on behalf of the striking school children, the Tidy Towns, the voters and our planet. This campaign marks the beginning of the end of plastic election posters and paves the way for a complete ban in the future,” they said.

While I totally agree with the arguments behind the campaign, I think there has to be a middle ground to be found on this issue.

Elections are always an exciting time for the politicians themselves, and their teams, political anoraks and journalists. I love a good election. I love the buzz of the count centre. I love watching democracy in action. For me posters are part of the whole build-up to the event.

For some more seasoned politicians, they may get away without putting up posters. They are well-known and will naturally acrue votes.

However, for new faces to the political fray, people who may not be well known, they need to increase their profile to have a chance to get elected.

While I don’t agree with plastering posters on every telegraph pole in the county, there should be a dedicated space in each town where all the candidates can put a limited number of posters.

If there was a way to make them from recycled card rather than plastic, that would also be beneficial for the environment.

If every candidate agreed to cut back on the number of posters erected (although that would be very hard to police), that would also ensure a fairer playing field while also helping the environment.

The posters are only allowed up for a limited time and fines are issued if they are not taken down promptly.

The villages and towns are returned to normal after the election.

So, I think if every town or village had a dedicated area for a limited number of posters to keep members of the public informed, that could be a compromise, rather than a complete ban. Over time, posters will probably become obsolete with the next generation focused on online campaigning.