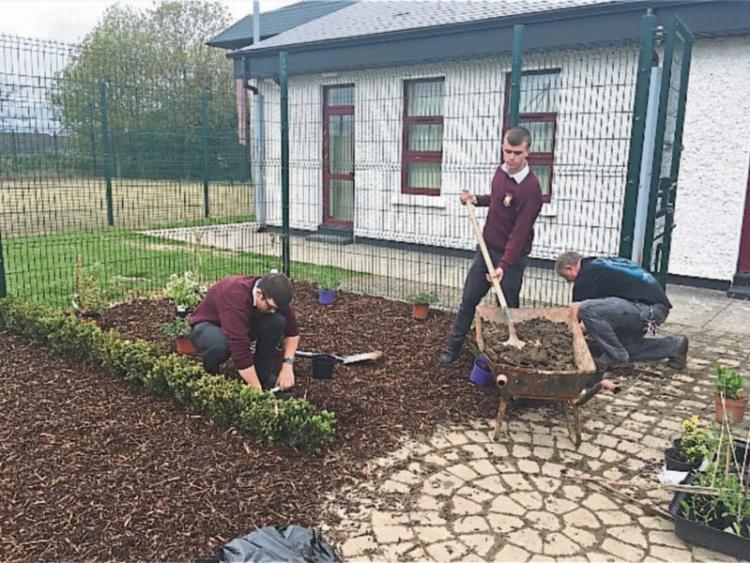 Working on the sensory garden at St Farnan's in Prosperous

An extension to a special garden created by students at St Farnan’s in Prosperous is expected to be completed by the summer.

This year, the school received a grant of €1,120 from the Kildare County Council community grant scheme to help with creating the garden.

Aaron Cullen, who started the move to create the garden at the post primary school said that last year he and fellow student, Kevin Bagnall and teacher Mr Little, spoke about creating a garden for the school.

It was suggested that they created one for the ASD unit.

“Principal, Mr Collins agreed to giving us a some money to create the garden,” he said, “We never delayed with starting and straight away started planning designs and clearing away the scrub and waste.

“Once we got a bigger picture of the site we set to work laying bark and putting in plants and features. Plants were kindly sponsored by D Cullen Landscapes and the soil by Jim Kelly.”

They completed the project in April 2018 and it was officially opened a month later in May. Aaron said: “It is great to see the boys of the unit get such fun and a sense of calm out of the garden.”

Aaron, who in January of this year, received the Kildare Garda Youth Award for his role thanked the teachers for nominating him. “Having seen the joy on the students of room 25’s faces I decided to try and extend the garden.”

He thanked everyone that has helped in anyway with the garden, including Cllr Brendan Weld, his friends, family and teachers “especially Ms Reilly without her drive and commitment there would be no sensory garden for the unit and also our generous sponsors.”