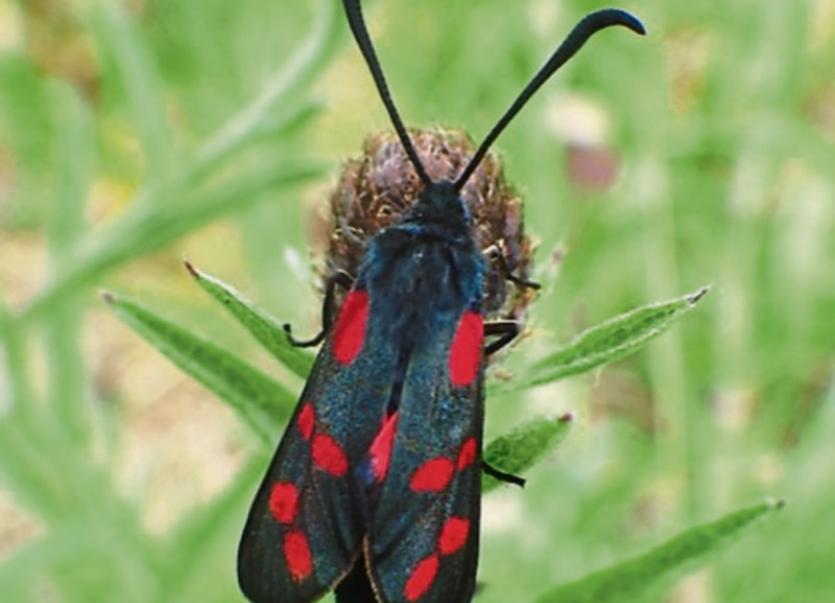 The moth in question

I agreed with them that colour can help to distinguish between butterflies and moths — however not all moths are dull in colour.

I showed the students a picture of the six spotted burnet moth (an séid dóite chonaic as Gaeilge) which my colleague had taken on Lullymore West bog last summer.

They were surprised to see the vibrant red spots on the forewing of the moth.

This particular moth will not be visible in your local area until June, but it is a very common species to come across as it is a day flying moth.

It can be found in grassland habitat, including roadside verges, woodland clearings and coastal habitats. As the name suggests, this moth has six red spots on dark green forewings.

The hind wings are red and the overall wingspan is 30 to 38mm in diameter.

At this time of year, the yellow and black caterpillar or larval stage of the six spotted burnet moth is overwintering. It will soon emerge and feed on its chosen food plant, birds foot trefoil, before it will spin a paper-like cocoon in early summer. Once the adult moths emerge, they are attracted to grassland plants including devil’s bit scabious and knapweed. The adults can be seen in flight throughout the summer.

The six spotted burnet moth is not the only moth with bright colours — the elephant hawk moth has cream wings outlined in pink!