A KILDARE MAN IN LONDON: The Clones Cyclone remembers his glory days 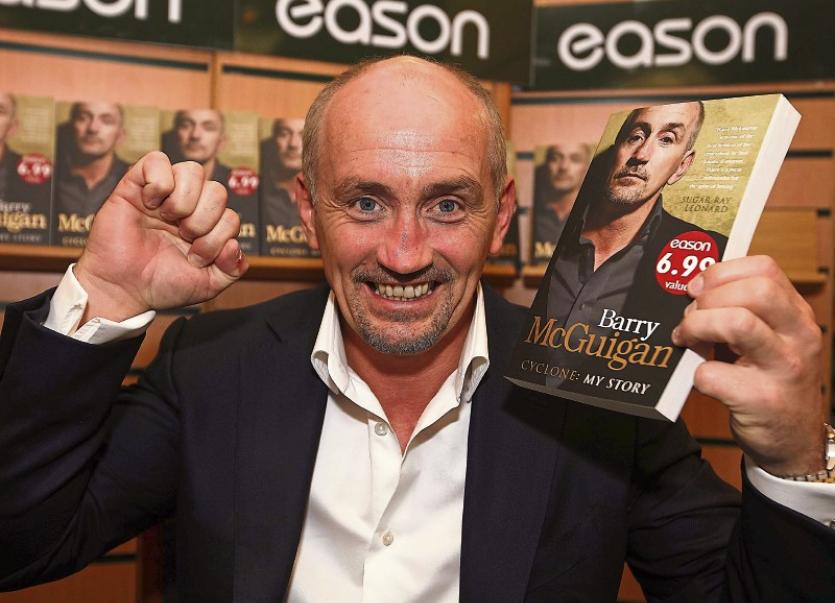 In just under three weeks time, Dennis Hogan from Carnalway will fight for the Junior Middleweight World Boxing title in Mexico. One boxer who shaped the future of his sport in this county and every other when Hogan was growing up in the mid-to-late 1980s, was Monaghan’s Barry McGuigan.

On the 30th year of his retirement from the ring, Robert Mulhern spoke to Barry McGuigan in London, about that period of his life when his achievements made him a hero to locally and globally.

Barry McGuigan remembers his sisters standing and counting his punches when he worked the heavy bag at the back of the family shop in Clones, Monaghan. In a three- minute round he could throw 300 punches.

“I was an animal in the gym,” he says. “I would train and train because I knew I could and because I knew I had to. I was very ambitious. My teammates thought I was mad. I’d a great club coach, a guy called Danny McEntee. He taught me to hit fellas at the end of the punch.”

In 1978, McGuigan says, he was selected to fight for Northern Ireland and his very first international competition was the Commonwealth Games. He won the gold medal. A year later in a dark corner of East Germany he shone again, defeating Mario Behrendt — son of 1956 Melbourne Olympic gold medal winner Wolfgang. And if the Cyclone was building, he flagged his impending arrival when aged just 18, in 1979, and still an amateur, he bloodied the nose of then World Lightweight Champion Jim Watt, during a training session in a gym in London’s Canning Town.

But Barry McGuigan says this burgeoning talent came with unwanted expectations. Clones was a different place in 1981. The town hung off the edge of Northern Ireland and shivered under the shockwaves of violence.

Raised on the border and Catholic by birth, some hardline Republicans expected that when McGuigan turned pro he’d become a figurehead for Irish nationalism.

But weary of politics, he choose to box in blue shorts emblazoned with a white dove for peace.

“There would have been some hardened republicans who wouldn’t have been happy alright,” he says. “But I didn’t care about those guys. There would have been loyalist guys who thought I was putting a fig leaf out to them too. But I was just making sure people [on the entire island of Ireland] could come to my fights and not feel threatened. That was it.

“There was very little to shout about then. We were submerged in death and sadness and I was sick of it. It took some of my energy. I was a kid and I was thinking, I hope people accept this.

“But I made the decision and my manager, Barney Eastwood, made it with me. Barney was a Catholic from Dungannon. He felt the same. He mixed with Protestant guys. We thought f**k it, we’re not going down that road. So I boxed in the colours of the United Nations and my old man sang Danny Boy before every fight. It was an outstanding success.”

He’s says it’s still surprising to him even now that a Barry McGuigan supporters club formed on the wrong side of the sectarian divide on Belfast’s Shankill Road.

Yet, it was very often the case that both Catholic and Protestant would stand side-by-side to watch McGuigan's fights in a Belfast where tensions on the street were then ratcheting ever higher.

This was the social backdrop of him becoming a global star.

He was a hell of a boxer. Possessed of heavy hands and a savage work-rate, but he wasn’t naïve either. He knew the political situation in the North — and his assumed position in the neutral corner — helped fuel interest. He recognises now that while his style made him appealing, his political stance widened it.

“I’m not stupid,” he says. “It was the political situation as well. I wouldn’t wear any colours and people coined the phrase: ‘leave the fighting to McGuigan.’

He recalls that he was only 17 when he realised that his ability in the ring could help create an atmosphere of peace between fighting men outside of it.

That was when as an amateur he boxed, again, in a working men’s club on Belfast’s Shankill Road — rugged terrain for a catholic from the south.

“I was boxing for Northern Ireland that night,” he says. “I was in against this 6ft tall bantamweight called Torsten Koch, a German, and I beat the living daylights out of him.”

That he enjoyed cross-community support long before this expression became a political catchphrase is something that remains a source of pride to this day. He glimpsed what boxing could do to a world beyond sport and he loved his sport even more for that reason.

And if his rise as a professional was both rapid and intoxicating, his career famously peaked on June 8th, 1985 when McGuigan fought Eusebio Pedroza for the WBA Featherweight World Title in London’s Loftus Road.

“Twenty million people tuned into the BBC to watch the fight.

“We had gone coast-to-coast in America for five fights before that. The interest was crazy.”

Even after all this time he reflects on the occasion as a triumph and for the feeling of togetherness.

In 1985, the landscape of Ireland and England was coloured by violence but McGuigan’s world title win offered a rare glimpse of unity.

“Within hours of beating Pedroza, there were 70,000 people welcoming me on the Royal Avenue in Belfast,” he says.

“Three days later in Dublin there were 200,000 people there. I loved the fact that people were very proud of me and that it really meant something to them.

“I was doing all my foundation work in Clones that time. I’d a gym out the back of the shop and people would just walk in and watch me train. My mother would say: ‘Go in the back. He’s out the back’. It got to the stage when me and my brother Dermot would start training at 11 at night and we’d stay going until 1.30 because after I won the world title, that was the only chance I’d get.”

He says now that he never fell out with boxing and his career will always be associated with that Pedroza fight and the defeat he suffered at the hands of the Texan Steve Cruz in Nevada in 1986.

Yet despite political complexity, his blueprint for success had simple foundations.

“I set a pace few fighters could live with and the feeling was incredible,” he says reflecting on the aftermath of the Pedroza fight.

“It’s difficult now to describe it. The sense of elation, of achievement, it was overwhelming. To have all those people around me, cheering and celebrating: my dad, my brother Dermot, for them to be part of that moment was just fantastic.”