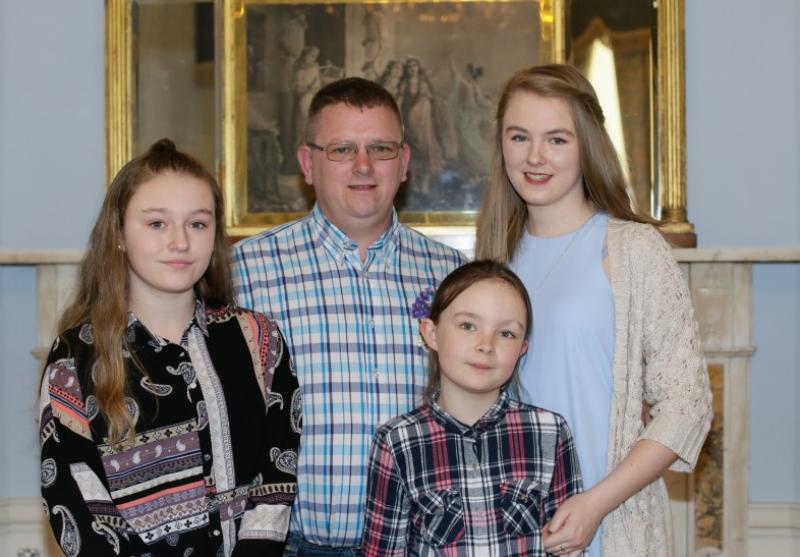 An Athy family who lost their beloved wife and mum to a brain haemorrhage in 2017 is proudly backing Organ Donor Awareness Week 2019.

Barry Davis and the oldest of his three daughters Lauren, 18, attended the national launch of the event in the Mansion House Dublin today, Tuesday March 26.

Barry's late wife Ashling passed away in July 2017. Her heart, two kidneys and one liver were donated, giving renewed life to four people.

Lauren and Barry want to share their family's story in support of the event. Barry pointed out the importance of having a conversation with family members about their views on organ donation.

"A few years ago there was an item on the Late Late Show about organ donation and Ashling said she would like her organs to be donated if she was ever in that position. That made our decision very easy when we had to make that decision because we knew what her wishes were. Even though we were grieving, there was a little ray of sunshine that four people's lives were saved," he said.

Barry met Ashling, who was originally from Newbridge, when they both worked at Oral B. They later got married and moved to Athy when they were expecting their first child.

"She was an amazing person and a loving mother. She enjoyed life and she was always caring for others. She gave up work to look after the children and when she went back to work, she became a carer - that was the type of person she was. Through her donation, she was caring for others right up until the end."

Barry said it was an inspirational launch, meeting so many people whose lives have been renewed through organ donation and speaking to other families who have been in their shoes. He praised the medical staff for the way they treated his family with dignity and compassion at that very tough time.

The loss of Ashling has hit the family hard, but Barry did not hesitate in backing this campaign.

"It's easy to speak about something you believe in and it does help the grieving process. In life, there are always going to be hard situations that you have to deal with. This is about talking about your own experiences and there were 234 transplants in Ireland last year, down from 274 the previous year. If speaking about it and creating awareness saves lives, that can only be a good thing."

Lauren is also 100% behind the awareness campaign. She is studying Sports Science and Health at Tallaght Technical Institute and she hopes to further her studies to qualify in Occupational Therapy. Lauren's two younger sisters are Niamh, 13, and Grace, 9.

The campaign will take place from March 30 until April 6 encouraging the public to support organ donation for transplantation by letting their loved ones know their wishes.

“It’s such an honour to be asked to be ambassador for this year’s campaign. Organ donation is something that I feel very strongly about. Listening to people’s stories down through the years about organ transplantation, dialysis and organ donation, sometimes heart-warming and at other times heart-wrenching, I honestly believe that there is no better gift in life than the gift of organ donation," said Ray.

“I have heard from grieving families about the solace they have got from donating the organs of someone they have loved knowing that other individuals and families have benefited. The news of a person receiving a transplant affects the families involved and it ripples through communities around Ireland.

“I have also heard how people’s lives have been transformed through organ transplantation and I commend the donors who have made this possible. There are approximately 550 people in Ireland awaiting an organ transplant and hopefully these people’s lives will be saved through organ transplantation. I would encourage everyone to discuss organ donation with their family members as I have done with mine. It doesn’t have to be a long conversation, but it is such a vital and
potentially life-saving one. The legacy of organ donation by selfless deceased donor families is profound.”

The IKA is the organisation charged with the promotion and distribution of the organ donor card in Ireland through Organ Donation and Transplant Ireland (ODTI), the organ procurement service of the HSE.

The focus of Organ Donor Awareness Week is to remind individuals to talk to their families about their organ donation wishes and keep the reminders of their decision visible by carrying the organ donor card and permitting Code 115 to be included on their driver’s license or downloading the ‘digital organ donor card’ APP to their smartphone.

Throughout the week, the association’s volunteers will be out on the streets, and in shopping centres throughout the country, distributing organ donor cards while selling forget-me-not-flower&#39; emblems, brooches, pens and shopping trolley discs.

All proceeds go towards the Irish Kidney Association’s aid for patients on dialysis and those patients fortunate enough to
have received a kidney transplant.

Information fact files, which accompany the free organ donor cards, are obtainable from the Irish Kidney Association and are available nationwide from pharmacies, GP surgeries and post offices.

Organ Donor Cards can also be obtained by phoning the Irish Kidney Association tel. 01 6205306 or Free text the word DONOR to 50050. Visit website www.ika.ie/card   You can now download a free ‘digital organ donor card’ APP to your phone.