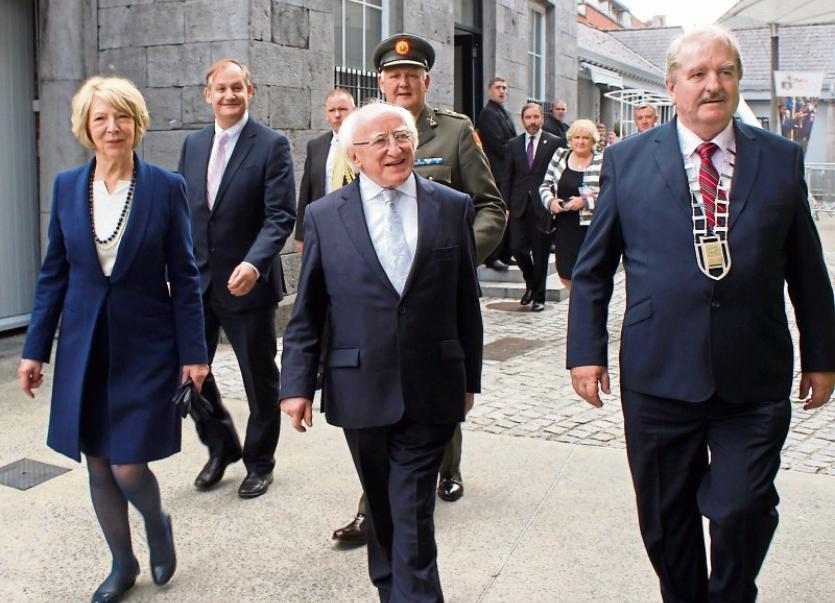 Well, did Santy come to everyone? I know we are in to the second week of 2019 but this is the first new column I have written since before Christmas so I have to fill you in on what the big bearded man brought.

Or perhaps I’ll just talk about the two gifts that have sparked Sarah’s latest obsession.

So both Aidan and Sarah were lucky to get everything they put on their Santa lists, but of course there were a few surprises Christmas morning as well. Having seen it on the Late Late Toy Show, I was delighted when Santa brought two Miggle D Giggles teddies and a book called The President’s Cat for Sarah.

At five and four neither of the kids are politics buffs — however, when the presidential election was on last year they always wanted to know who the people were in the posters that were hung everywhere and anywhere.

As best I could, I tried to explain the idea of an election to them. They asked me who I was going to pick, as they put it, to be the President and of course I told them I was going to vote for Michael D Higgins. So from then on, they have had quite the soft spot for Galway man.

To make it even more interesting for them, I informed them that Higgins’ house, when he is not in the Áras, is just a stone’s throw from his Nanny and Grandad’s house in Galway.

On polling day, they insisted on coming with me to vote and both checked my ballot paper to make sure I put the X beside Michael D’s picture.

Santa must have decided to encourage their early love for politics when he dropped off the Michael D Higgins-inspired gifts for them.

The soft toys, the Miggle D Giggles, are brilliant and when you press the belly they laugh just like the President and say “is breá liom éire!”

Aidan likes the teddy but Sarah loves it. Indeed she sleeps with ‘the President’ every single night and has rarely let it out of her sight since it arrived on Christmas Day.

And every single night before bed, she makes me read The President’s Cat to her. It’s a beautifully illustrated book, written by Peter Donnelly, that tells the story of Michael D’s missing cat.

The cat is finally found down in Cork and has quite the adventure on the way back to the Áras when he meets a fishmonger, hippies and a monk with a monkey.

Since Christmas, Sarah’s interest in Michael D Higgins has sky-rocketed. I’m a politics lover myself so I decided it would be nice to tell her more about Michael D Higgins, about Áras an Uachtaráin, and about how Higgins used to be a member of the Labour Party before becoming President in 2011.

But of course, a four-year-old only hears one thing when you tell them about the Labour Party.

“I want to go,” was her response to that nugget of information about Higgins.

“To the Labour Party,” she said excitedly.

I didn’t have the heart to knock her enthusiasm.

“What will I wear to the Labour Party, Mammy?” she asked me.

So I told her that she would absolutely have to wear red to the Labour Party.

So these days she tells anyone who will listen to her, including strangers, that she is going to a Labour Party in a place called Áras an Uachtaráin in Dublin, she’s going to wear a pretty red dress and Michael D Higgins is going to be there!

Every single morning since Christmas she has asked if it was yet time for the Labour Party and when I inform her it isn’t her little excited face turns gloomy.

When we visited nanny and grandad in Galway after Christmas, she made her daddy drive past Michael D’s house a few times and even begged to go knock on the door just in case he was visiting from Dublin!

She even gets excited when the 6 o’clock news comes on, in the hope of catching a glimpse of the President on the screen!

She spends her mornings drawing pictures of Michael D, which are now all carefully stored under her bed because she’s going to bring them with her to the Labour Party apparently!

When I told her that Michael D is married to a woman called Sabine, her Baby Born dolly was quickly renamed from Molly to Sabine.

I swear, I’m not making one single bit of this up! Is Sarah the youngest stalker in history?! I think she may just well be.

Although, don’t most kids get obsessions with boy bands or Disney stars? I know Joey McIntyre from New Kids on the Block was my first showbiz crush, and later Mark Owen of Take That fame.

However, I have a four year old who idolises a 77-year-old politician. Credit that!

Sarah even begged us to change the name of our dog from Seamus to either Bród and Sioda after Daddy Chambers informed her that’s what Michael D’s dogs are called!

I just can’t burst her little innocent bubble. I can’t bring myself to tell her that the Labour Party has nothing to do with cake, sweets and bouncy castles.

I can’t bring myself to tell her that she’s not going to Áras an Uachtaráin to eat ice cream and play musical statues with Michael D Higgins. How could I do that to her?!

Until next week folks,! Oh and happy New Year to you all.