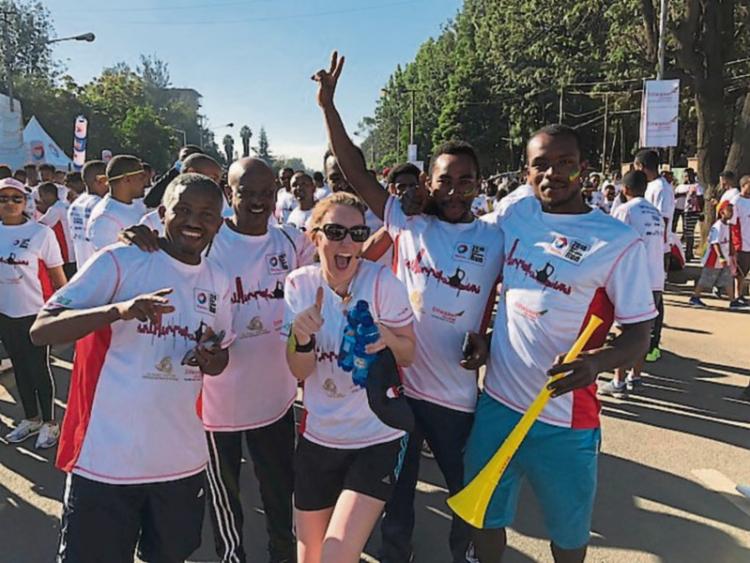 A Clane woman was one of a wide variety Irish volunteers who have helped raise money for an Ethiopian sight project this year by taking part in the Great Ethiopian Run with Orbis Ireland.

Cora McCormack joined thousands of other runners on the streets of Addis Ababa on Sunday, November 18 for Africa's biggest road race, a challenging race 10km run at 10,000 ft above sea level.

Cora, who works in the aircraft leasing business, travelled to Ethiopia with a number of work colleagues from SMBC Aviation on Thursday, November 15.

They did some training on the Friday and visited some facilities on the Saturday.

They were raising money for Orbis, which over the last decade has helped to greatly reduce the incidence of blindness in Ethiopia.

Cora, who is married to Philip, has lived in Clane for twelve years.

A regular runner, she said it would be very difficult for a non runners to do the race because of the altitude.

“I completed it in an hour and ten minutes whereas here it would usually take me an hour,” said. “I felt very light headed and nauseous at the end,” she said.

She said there was a carnival atmosphere.

“It was a new experience for me,” she said describing the crowds lining the streets.

The race was established in 2001 by one of the world's greatest long-distance runners, Haile Gebrselassie.

Over the past nine years Orbis has raised almost €934,000 through participating in The Great Ethiopian Run.