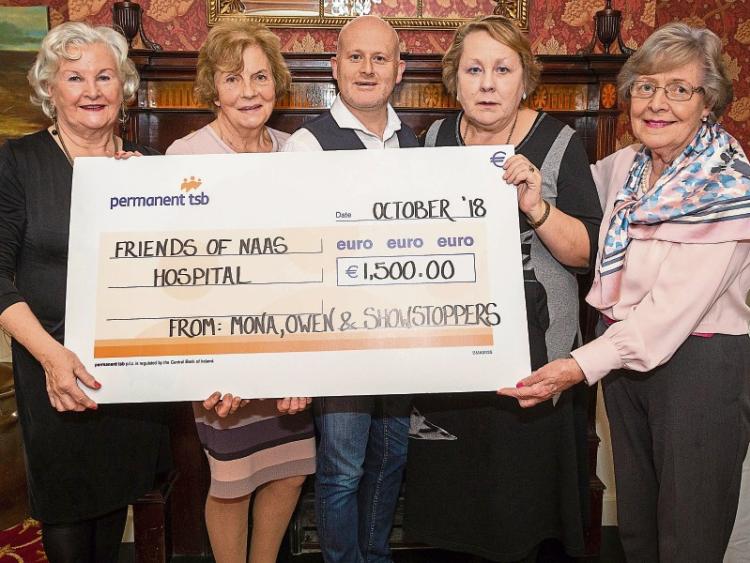 Naas musical director Mona Conroy, who has long had a close involvement with the local arts scene, was the driving force behind the staging of the Some Enchanted Evening production at the Moat Theatre last August.

Read also: Prosperous community meeting to take place at end of the month

The show was performed by the ‘Showstoppers’ cast to raise funds for The Carers Fund, Le Chéile Unit, Athy; The Friends of Naas Hospital; The Pastimes Community Choir and the Moat Theatre.

Mona, Owen C Lynch, Deirdre Browne and the cast of Some Enchanted Evening presented the cheques for monies raised on Sunday, October 21, in Lawlor’s Hotel, Naas.

Mona’s son John, the well-known cinematographer, and his partner, model Yvonne Connolly, were present at the gala night, along with other family members.

The sell-out concert was put on to show the appreciation that Mona and her family have towards all the people who have and are looking after Mona’s husband Jack, who has Alzheimer’s.

He is now a resident in Le Cheile in Athy, but was also looked after by the wonderful staff of the Imaal ward in Naas Hospital and loved his time in the Pastimes Choir.

“Film, music and theatre are a big part of Jack’s life and we were delighted to help our local theatre, The Moat,” they said. “To everyone who attended or made a donation in any way, a massive big thank you.”