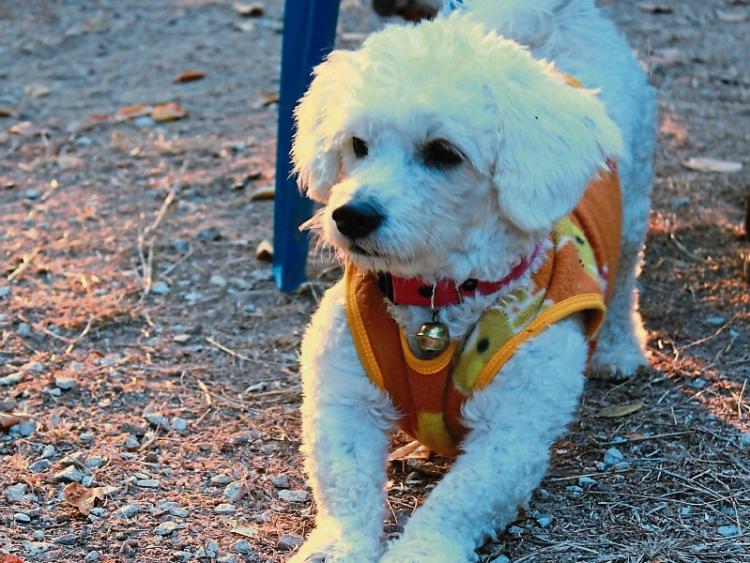 As you all know, my full-time job these days is looking after the kids and the house. There’s rarely a minute of the day I’m not busy.

A nice busy, mind you, but there’s always something to be done. So why the hell am I considering making myself even more busy? Why am I considering adding another small being to our household?

Nah, don’t be mad, I’m not considering a third small human! However, I — well rather, we — are considering getting a small fur baby. A puppy, to be precise.

Up to this point I would never have considering getting one. When I worked full time there was no chance I would have had a dog.

It would not have been fair on the poor animal, what with all of us gone out of the house all day. Plus, we had a pretty small garden too.

Of course there was also the fact that both Aidan and Sarah were absolutely terrified of dogs before we moved to the country.

There was a dog in our old estate, which I’m now told is deceased, that turned them off dogs for life. Said dog was lovely, but because he was a puppy of the springer spaniel variety, he was a tad giddy and that’s putting it mildly.

Bailey was his name, and whenever he escaped from the confines of his back garden he went a bit nuts. He clearly loved children, but he scared the living daylights out of mine.

The second Bailey set eyes on Aidan and Sarah he ran straight for them, which in turn made my two run. The dog thought it was a game and my two howled and howled in fright until they made it back to the front door of our house. In fact Aidan once asked me if we sold our old house because they were afraid of Bailey!

My own mother is a cat lady, widowed and living with her three cats; Bart, Taffy and Molly. And the kids were even afraid of the cats, would you believe. Sarah nearly jumped out of her skin when one of them walked by her, and even the mention of petting them would see her burst in to a flood of tears.

I have no idea what has changed in the last couple of months. Perhaps it’s the country lifestyle, but Aidan and Sarah have done a complete 360 and have turned in to animal lovers.

Sarah spends most of her day out in granny’s house playing with the cats. Bart scraped her last week, and instead of having a fit, she declared that Bart was having a bad day and that it was alright.

I now can’t go for a walk in the park without them both stopping, petting and chatting to every single dog in the place! It’s a bit tedious, to be perfectly honest!

The dog that changed their attitude to the canine variety is one called Penny who lives at the playschool Sarah goes to.

Said playschool is very country. It’s in a local lady’s house and it only has eight little students in it, one of them being Sarah. Now Penny is anything but pretty, and I’d say she’s narky enough when she wants to be. Despite all this, Sarah quite simply adores her.

She’s rather obsessed. In fact, on Hallowe’en night I had to get in my car and drive her over to her teacher’s house to go trick or treating.

It had nothing to do with wanting to see her teacher, because the minute the door was open, Sarah flew past and into the hall to greet Penny with a massive hug. Penny was delighted with herself!

So it’s with all that in mind that we are now considering getting a little dog of our own, but I do have my concerns.

Am I mad? Let’s be honest here, I’ll be the one that has to do most of the work with it, which will include picking up the sh*te in the garden so the kids can go out and play freely in it!

I’ve done a small bit of research in to it. First and foremost I want a dog that is good with children. I also want one that doesn’t shed because I’m not about to let the new house get ruined with dog hair. Oh, and that’s another thing — I don’t believe in getting a pet and then not allowing it in to the house at all. That’s not even a pet in my mind!

My research led me to the Bichon Frise breed; cute, furry and white. They look like four-legged teddy bears. They don’t shed, they have a friendly and fun temperament but do tend to suffer with separation anxiety!

I want one though. They are awful cute.

My research led to ring the Irish Kennel Club to ask if they knew any breeders. The lady on the phone gave me one vital bit of advice — under no circumstances should we buy one from the likes of Done Deal as dogs advertised on such sites have most likely came from puppy farms. I wouldn’t have known that, so I’m glad I made the call. Now, I know I should do the responsible thing and give a poor rescue dog a home but with two small kids I am not willing to take that chance. If we get one I want to know its breeding and know that it will be true to form.

With that in mind, we found a woman in Northern Ireland who has four male Bichon Frise for sale. She sent me pictures of her babies, which she shouldn’t have because I came so close to just jumping in the car and driving up there for one the second I saw them. I so dearly want one though, but we still have to think it through a small bit more.

With that in mind, I’d love to hear your opinions on having a family pet. Would you recommend it? Will a dog be good for the kids? Am I mad taking on more responsibility? Please email me on the below address and tell me all the pros and cons because I could really do with all the advice going before we take the step of adding to our family.