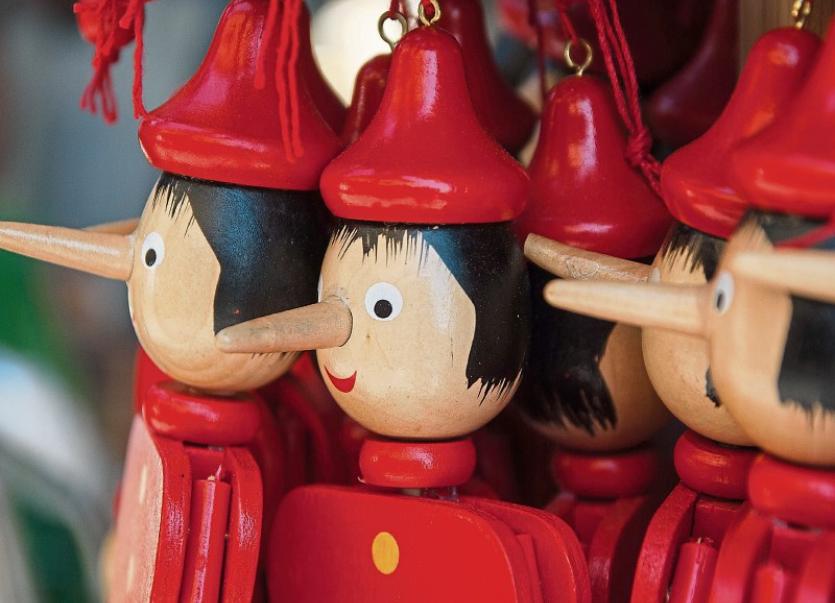 When Frances Black sung about all the lies she was told, she was lamenting the breakdown of a romance. It’s a song that could be sung by many a child could sing too because let’s face it, they are told an awful lot of lies on a daily basis.

Well, at least I think they are. Mine are anyway! When I think about it, I’m quite the dishonest mother. Like... really dishonest.

When they appear beside my bed at 6.30am every morning looking for breakfast I, without fail, instruct them to go back to bed because it’s the middle of the night.

Then there’s the ‘hurry up’ lie. Ten minutes before we leave the house for the school drop offs, I tell them to hurry up because we are late for school. Of course we are not late for school, but if I didn’t tell them that we would end up being late! If I started to round them up at the actual time we are supposed to leave, the whole getting to school would turn in to an awful frantic ordeal.

I figure there’s no harm in that white lie because it’s better for them to leave the house with a calm mammy rather than one that’s flustered and shoving them in to the car while growling at them.

Requests for play dates is another thing I lie about all the time. Don’t get me wrong, I have no problem with play dates but given the chance Aidan would have one every single day of the week.

So sometimes when he asks if Joe Bloggs can come over to play, I nod and say I will ask his mammy. I don’t though, and, when I’m interrogated about it later, I tell another lie. It’s amazing how many kids round here go to see their imaginary granny in Dublin and can’t make play dates!

On Friday after school, I usually pop to the supermarket to pick up some bits that usually include a bottle of wine for the weekend.

When the kids are with me I tell them it’s grape juice (not technically a lie!) and that it isn’t for me and that granny asked me to pick it up for her! We don’t drink in front of the kids so I figure this is also a nice white lie to be telling them.

I also turn on the lies when it comes to bed time. I’m really lucky that both of them go to bed at 7pm but they both think they are up half the night!

Come 6.30pm I close all the window blinds and curtains and a half an hour later I start telling them how late it is!

It’s ten o’clock, says I, as I rush them up the hall to their rooms. I won’t get away with this one for much longer, and to be honest I’m dreading the day they learn to actually tell the time! Karma will probably come back to bite me on the ass on this one!

Aidan is a really fussy eater and trying to get him to try new and healthy foods is next to impossible.

One Saturday recently, we all went out for lunch after football training. I ordered a tuna melt, and lo and behold, Aidan wanted to try it. I was flabbergasted when he told me he actually liked it.

Then, of course, he asked me what tuna is. I just couldn’t tell him it is fish because there’s no way he would eat it again if he knew that.

So in our house tuna is just tuna. Nothing more and nothing less. The reason why there’s a picture of a fish on the tin is because the man who put the tuna in the tin like to draw fish! I just couldn’t come up with anything more inventive than that!

I don’t care though, the child eats tuna and that is a massive step for him!

Aidan and Sarah also believe that I literally don’t have a penny, or should I say cent, to my name since I became a stay-at-home mammy in the summer.

I have to say this has been quite the handy lie over the last few months. Anytime we go to the shops they still beg me for something, usually for a toy or sweets, so I tell them I don’t have any money to buy them anything because I don’t work anymore.

Aidan, getting cuter, normally asks why I’m in the shop buying groceries if I don’t have any money, so I just tell him Daddy Chambers told me to only buy food, and if I don’t we won’t be able to eat for the week!

Thankfully we are not that hard up but this lie has saved me so much since August!

When you actually think of it, we tell an astounding amount of lies to kids.

But what’s that old saying? Ah yes, it’s anything for an easy life, or in this case an easier life! I’ll be keeping them up for as long as I will get away with it and that’s for sure.