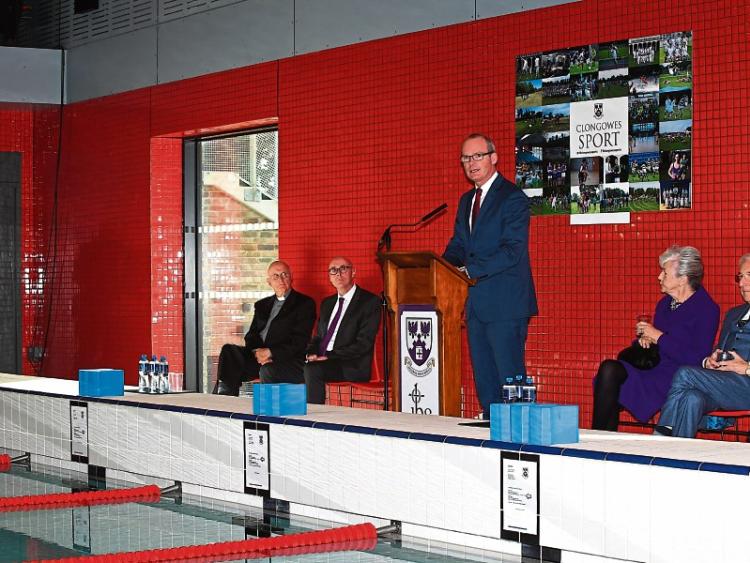 Minister Coveney, along with James Joyce and Michael O’Leary, is one of the school’s more illustrious former pupils.

The school’s new pool is 25 metres long and has five lanes. It replaces one that was constructed in 1887, which was widely accepted to be the first indoor swimming pool in Ireland. The new pool is adjacent to the sports hall complex which offers a diverse range of sports to complement the many outdoor facilities including grass and all weather pitches where GAA sports, soccer, rugby and cricket are played, as well as a nine hole golf course.

The new pool is fully funded by donations received from a fundraising drive organised by the Clongowes Foundation. And Carmel and Martin Naughton, of Glen Dimplex fame, were a key part of that. Mrs Naugton spoke at the launch, saying she hoped that she might one day hear of a “lad from Clongowes who didn’t score a try for Ireland, but saved somebody’s life because they learned to swim here”.

Speaking at the launch, Minister Coveney, who was expelled from the fee-paying school, admitted that his time there was challenging.

“I was never particularly good at being told what to do,” he said, although he credited the school with giving him a sense of a moral compass. Noting a sign that read: ‘No running, jumping or bombing,’ he said “Good luck with that!”